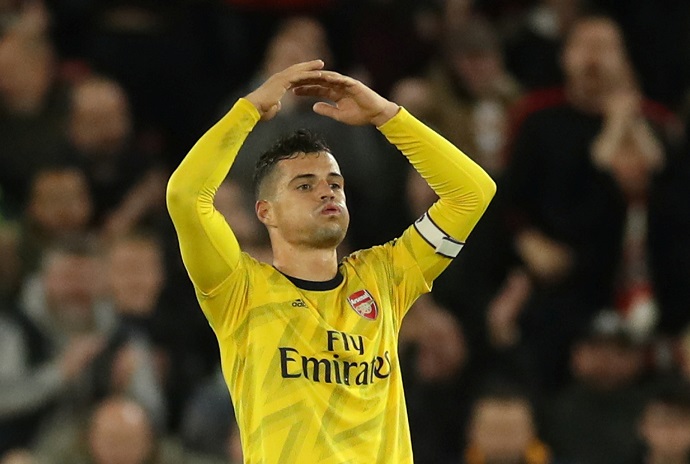 Xhaka, 27, may have played his last game for the Gunners after an ill-advised and expletive-laden exit from the pitch when substituted against Crystal Palace on October 27.

Arsenal manager Unai Emery immediately stripped the Switzerland international of the captaincy and he has not featured in subsequent top-flight games against Wolves and Leicester, while he did not travel to Portugal to take on Vitoria de Guimares in the Europa League.

There have been mixed messages coming out of the north London club, with reports that Emery would be happy to sell Xhaka in January, while the player himself has issued an apology and stated that he wants to fight for his place at the Emirates Stadium.

The Magpies are just two points behind Arsenal in a congested Premier League table after an encouraging spell for Steve Bruce’s side but the much-travelled manager knows they must not stand still in order to cement their spot in England’s top division.

Patrick Vieira on Granit Xhaka: 'I feel sorry for him because he's going through a really difficult period and really difficult time at Arsenal. But I think we have to remind ourselves that he's achieve a lot since he's [been] at Arsenal and he deserves a lot of respect' pic.twitter.com/bFp59HX05Q

The Northern Echo are reporting the Tynesiders’ board are prepared to back Bruce if he wants to try and lure the former Borussia Monchengladbach schemer to St James’ Park, with rumours he is targeting a midfielder and striker in the new year.

Managing director Lee Charnley is ‘understood to be willing to sanction such a deal if it could be agreed’.

One stumbling block might be the fact that Italian giants AC Milan are also thought to be in the frame for his signature and the lure of the San Siro and an exit from English football might appeal to the player.

However, he would probably see more game time at Newcastle and that might be a positive for Bruce, with Xhaka keen to impress ahead of Euro 2020.