Nainggolan, Shelvey, De Bruyne and the strikes of the season so far 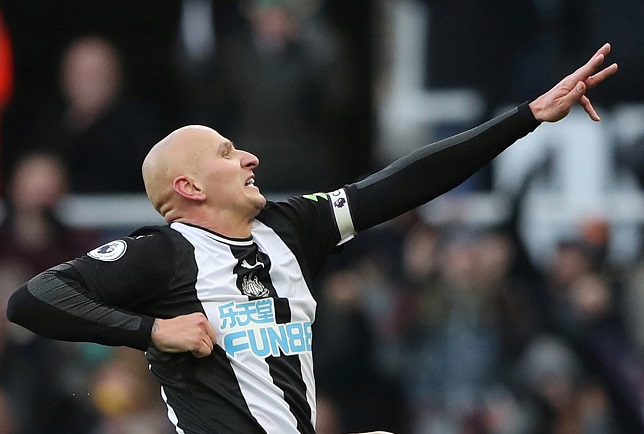 Manchester City’s 2-2 draw at Newcastle over the weekend was a pretty drab affair but at least we were treated to two wonder goals.

Kevin De Bruyne hit an absolute beauty to give City a late lead before Jonjo Shelvey cancelled that out with a peach of his own.

Inspired by those wonder goals we’ve knocked up a fairly niche top five strikes of the season list and the duo make the cut – but they don’t take top spot. Just for clarity, this list isn’t for free kicks, team goals or anything too fancy – just absolute instinctive screamers that could have broken the net.

City had been carving out plenty of opportunities but just couldn’t find that killer touch until De Bruyne took the ball down on his chest and unleashed an incredible strike beyond Martin Dubravka. The power he generated was immense, and chances are if the Newcastle keeper had managed to get his body behind the ball he’d have ended up in the net with it.

De Bruyne’s reaction at the end told a story too, as rather than being delighted with his effort he appeared to be frustrated it had taken so long to claim the lead.

De Bruyne’s relief was short lived as Newcastle were level almost instantly. A free kick was laid off to Shelvey, who duly stroked a curling effort home from range. Although De Bruyne’s was more spectacular, Shelvey’s effort edges his out as it took a little more thought and technique to execute.

What is it with 2-2 draws and wonder goals? Back in October Stefano Pioli had just taken charge of AC Milan and a home game against minnows Lecce looked to be an ideal chance to kick off his Rossoneri tenure with a win.

Things were going to plan as Milan opened up a 2-1 lead but visiting left-back Marco Calderoni had other ideas and hit an absolute stunner in from range to claim a share of the spoils for Lecce.

Usually when a centre-half decides to try his luck from 35 yards the end result is a goal kick to the opposition and the unique sound of a collective groan mixed with a few sarcastic cheers depending on what end of the ground you’re in. That wasn’t the case when Chelsea’s Fikayo Tomori took aim against Wolves back in September.

That was Tomori’s first goal for the Stamford Bridge club and he could spend the rest of his career there and still not score one better.

We’re back in Serie A for the top goal so far and serial stunner scorer Radja Nainggolan takes the honours with his unbelievable strike in Cagliari’s win over SPAL.

Nainggolan could have cropped up on this list a few times, his goal in a 5-2 drubbing of Fiorentina was also pretty special, but this one… it has a bit of everything; from the perfectly weighted touch on the chest to the hint of nonchalance about the strike that suggested he knew exactly what the end result would be.