Are protests starting to hit the mark at Newcastle? 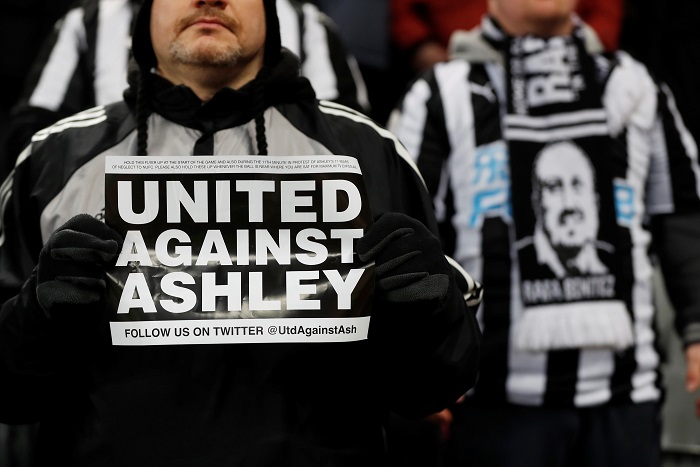 With Newcastle launching a season-ticket initiative on Tuesday, are the continued protests from the Geordie faithful beginning to have an impact on the owner?

It is safe to say Mike Ashley’s time as Newcastle owner has had several ups and downs since he bought the club in 2007.

From drinking in the stands with supporters to changing the stadium name from St James’ Park to the Sports Direct Arena, there always seems to be a talking point just around the corner.

Having seen a lack of spending and takeover talks fade away over the past couple of years, it was the last straw for several fans in the summer when Rafael Benitez, a Champions League-winning manager, was not kept at the helm.

Instead of giving the Spaniard what he wanted, which was some investment in the squad and the infrastructure of the club, Ashley allowed the 59-year-old to leave when his contract expired and instead decided to bring in Steve Bruce.

Not being disrespectful to the former Manchester United defender but, to fans of the club, it felt like the Magpies had gone from having a Porsche 911 in charge to a Reliant Robin. The appointment felt uninspiring and Ashley would certainly know about it.

In the first game of the season, at home to Arsenal, a mass protest was staged prior to the match, which the Gunners won 1-0, calling for the owner to sell the club and effectively leave the city in peace.

However, unsurprisingly, Ashley has stuck around and he will be feeling pleased with the work Bruce is doing this season as Newcastle sit 11th in the Premier League, just two points behind Manchester United in fifth.

Sunday’s 2-1 home victory against Southampton extended the Magpies’ unbeaten run to three matches but there was something missing at St James’ Park – the 10,000 supporters who didn’t show up!

With 42,303 in attendance, it was Newcastle’s lowest home crowd for a Premier League match since November 2010 and appears to have sprung Ashley into action to boost crowd figures.

The north-east outfit are offering season-ticket holders a free additional half-season ticket to gift to fellow supporters to help fill the stadium on Tyneside, and it will be interesting to see whether or not supporters get behind the initiative.

For the fans that continue to stay away from St James’ Park in protest against the owner, it will be music to their ears as the recent attendance, which is 10,000 less than capacity, looks to be hurting Ashley’s pocket.

Although offering a free half-season ticket, Ashley still must have in the back of his mind that a potential full crowd will generate income in terms of food and drink, highlighting how clever the businessman can be.

Overall, it does look like the protests are having an impact and if the attendances did slip below the 40,000 mark, which would be unheard of at such a well-supported club like Newcastle, the owner may increase his efforts to sell the club.