Bruce hoping Newcastle can kick on after Cup win 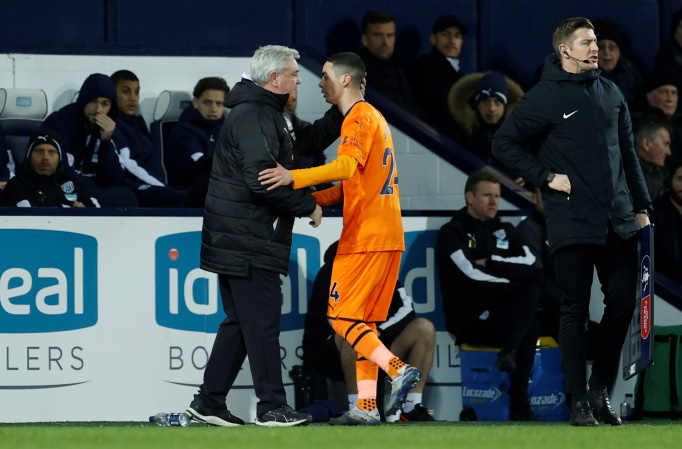 Miguel Almiron’s double and Valentino Lazaro sent the Magpies into the last eight for the first time since 2006, as they overcame West Brom 3-2 at the Hawthorns.

Late goals from Matt Phillips and Kenneth Zohore gave Albion credit after Newcastle threatened to outclass their hosts, and set up a tense finale, but the Magpies managed to hold on and go through.

Newcastle are five points clear of the Premier League’s relegation zone but are now one game from a Wembley semi-final and Bruce believes their cup exploits can help their safety fight.

🗣 "To have this many supporters sing their heads off all night was terrific."

Steve Bruce's thoughts on tonight's victory at the Hawthorns. #NUFC

Allan Saint-Maximin had already hit the post from 25 yards before he set up Almiron to fire past Jonathan Bond after 33 minutes.

The Paraguay international, who now has six goals this term, made it 2-0 in first-half injury time when he latched on to Joelinton’s backheel.

Just 74 seconds into the second half Lazaro added a third when Bond palmed Saint-Maximin’s cross into his path.

Albion looked beaten but Phillips pulled a goal back after 74 minutes and Zohore made Newcastle nervous when he turned in at the near post in injury time.

The Baggies ran out of time though and must focus on their quest to return to the Premier League after a two-year absence. There is a good chance these two could lock horns again next season, but they will both be hoping it is in the Premier League, not the Championship.