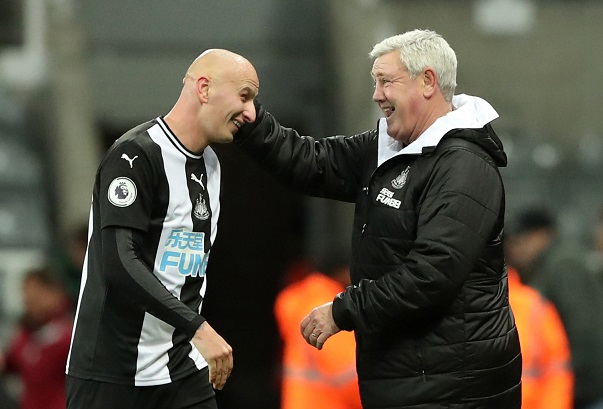 Steve Bruce says he is very happy after Jonjo Shelvey and Matt Ritchie both signed new three-year contracts on Friday.

England international Shelvey joined the Magpies in January 2016 from Swansea City and has been a regular first-team member, making 119 appearances in the Championship and Premier League combined.

Scotland midfielder Ritchie arrived at St James’ Park six months later, having left Premier League outfit Bournemouth to join the newly-relegated side, and he has gone on to feature in 122 matches.

The duo’s previous deals were set to expire in the summer of 2021, casting slight doubts over their long-term futures on Tyneside, but they have both been rewarded with new contracts until 2023.

Ritchie and Shelvey have struggled with injury at times this season although they are both back to full fitness and hoping to play a big part in the club’s battle to avoid the drop this season.

Bruce told his press conference on Friday: “I’m delighted. They’ve been very, very good over the last few years for Newcastle and I’ve been lucky enough to inherit the two of them.

“We all know what Ritchie’s like – there’s never a dull day. Jonjo is a very talented footballer. I’m delighted they’ve committed their future.”

Shelvey, who came on as a substitute in Tuesday’s 3-2 FA Cup fifth-round win against West Brom at the Hawthorns, and Ritchie are both in contention to start Newcastle’s Premier League clash at Southampton on Saturday.

The Magpies have just one league win from their last 10 games, a run of form which has seen the club slip to 14th position in the standings and just five points clear of the relegation zone.

Bruce’s men, who will take on Manchester City in the quarter-finals of the FA Cup later this month, are unbeaten in their last five meetings against the Saints, winning the last two encounters 3-1 and 2-1 respectively.