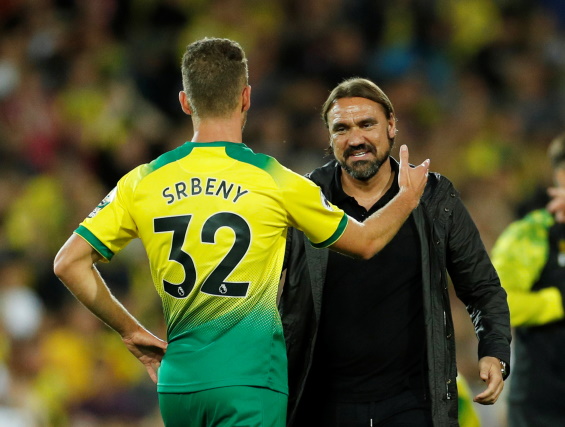 The 25-year-old signed for the Canaries from then third-tier Paderborn during January 2018 and went on to help Daniel Farke’s side win the Sky Bet Championship last season.

However, regular first-team opportunities were limited by the form of Finland forward Teemu Pukki, and a move away always looked to be on the cards this month.

The player has now got his wish and a return to his former club will suit all parties.

Srbeny made 43 appearances for Norwich, scoring five goals – the last of which came late on during the Premier League game at Everton to seal a 2-0 win in November.

A statement from the Norfolk club read: “All at Norwich City would like to thank Dennis for his contributions and wish him well in his future career.”

Srbeny has signed a two-and-a-half-year deal with Paderborn who are in desperate need of a lift and will be hoping he can hit the ground running.

They currently sit bottom of the Bundesliga, so he is swapping one relegation fight for another, but Paderborn sporting director Martin Przondziono sounds delighted to have got the player back on board.

“Dennis fits perfectly into our requirement profile of a large, team-friendly and accurate striker,” he said on their club’s website.

“He knows the conditions in Paderborn very well and is the dream player of our head coach Steffen Baumgart. We are very happy that this transfer worked out. I am sure that Dennis will directly help the team with his presence and danger of scoring.”

The departure of Srbeny will free up some cash for the Canaries to use on strengthening their own ranks and there is expected to be more comings and goings before the month is out.