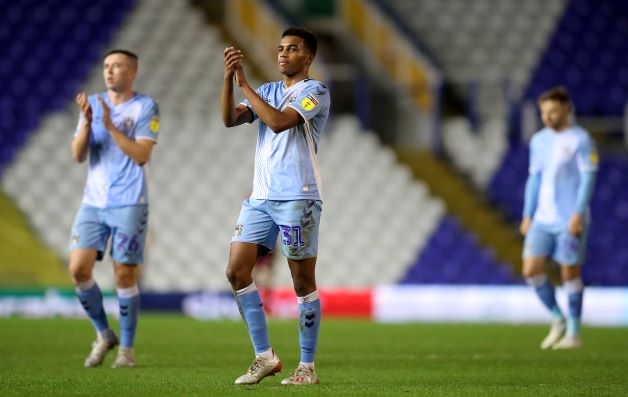 New Norwich signing Sam McCallum reckons he can follow in the footsteps of current Canaries aces Max Aarons, Ben Godfrey and Jamal Lewis all the way to the top.

After signing for Norwich prior to the January transfer deadline, McCallum was loaned back to Coventry City and has continued to impress for the promotion-chasing League One side.

The left-back admits he thought his dream of playing football professionally was over when he was released by Gillingham as a 15-year-old, but his determination to make the grade was unwavering.

Like many others who have risen back to the top of the football pyramid, he dropped into non-league and was turning out in front of crowds of just a few hundred as recently as 18 months ago.

His ambitions are now much grander than even playing in front of the 6623 paying spectators who saw him help Coventry maintain their promotion push with a 2-1 win over Bolton Wanderers at St Andrew’s on Saturday.

Coventry v Bolton in Birmingham today, team news below. New boy Ryan Giles on the bench, Sam McCallum makes first appearance since returning on loan, and Amadou Bakayoko hopes to build on his goal against BCFC on Tuesday #PUSB pic.twitter.com/mjJWAKzYNk

And he sees Carrow Road as the right place to be in the next few years for him to continue his own upwards trajectory.

“The philosophy is great down there,” he said. “They’ve brought through Ben Godfrey, Max Aarons and Jamal Lewis who are all starting week in, week out.”

“They’re now moving into the England set-up as well and that’s what I aspire to do,” McCallum said of Aarons and Godfrey, who have both been capped at Under-21 level.

“I know Norwich will help to progress me like they have with the prospects at the club at the moment. It’s not just like there is one player coming through, there’s loads of them.”

“We’re working on a few things for the summer because we definitely have to be prepared for different scenarios,” said Farke.

“We’re looking forward to attracting some top-class players, but also some young talents, or projects, like the signing of Sam and Melvin.”