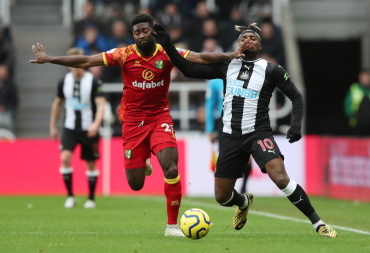 Norwich City have announced midfielder Alexander Tettey has signed a one-year contract extension at the club.

Tettey has since made 224 appearances for the Canaries, scoring eight goals across eight campaigns.

Tettey has seen plenty of ups and downs in Norfolk since his switch, enjoying the highs of promotion to the Premier League, as well as the lows of relegation to the Championship, and says he’s more than happy to sign on until the summer of 2021.

📸 With Alex Tettey extending his stay at the club until 2021, here are our 21 favourite pictures of the ever-present midfielder!

The Norway international told the club’s official website: “It’s massive for me. It feels so good to be in Norwich, and my family are happy.

“I do give advice whenever it’s necessary, but you don’t want to be on the young players all the time because you have to give them some room to grow and learn themselves. All the senior guys do give advice.

“There have been a few ups and downs throughout my time, but Wembley was a standout moment [winning the play-off final in 2015], as was winning the Championship trophy in 2019. They were huge.”

Head coach Daniel Farke says Tettey is a natural leader within the Norwich squad and he will be hoping the Ghana-born star can help keep the club in the Premier League.

An injury at the start of the campaign saw Tettey fall down the pecking order, but he has since made 19 appearances this season.

Moritz Leitner, Marco Stiepermann, Kenny McLean, Mario Vrancic and Tom Trybull are all competing with Tettey for a place in the middle of Farke’s midfield.

Norwich are currently languishing at the bottom of the Premier League table, eight points away from safety.

Their chances of survival may depend on their results in the next few weeks, but they have a tough schedule as they prepare to face Liverpool, Wolves, Leicester City, Sheffield United and Southampton.