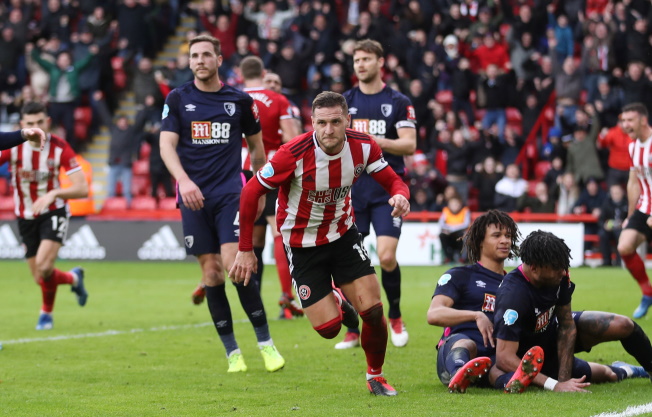 Sheffield United captain Billy Sharp says he never had any plans to leave the club in the January transfer window and hopes to end his career at Bramall Lane.

The 34-year-old has enjoyed three spells at his beloved Blades, scoring over 100 goals in the process.

Sharp started his professional career with the club before spells with Doncaster Rovers, Southampton, Nottingham Forest and Leeds United prior to returning in 2015.

He has since scored 91 goals to help the Blades climb from League One to the Premier League although his lack of game-time recently meant Championship clubs were tempted by loan approaches.

Leeds’ failure to sign Che Adams from Southampton saw them turn their attention to Sharp, while Forest were also linked with a temporary move.

Manager Chris Wilder claimed he wanted him to stay put and Sharp rewarded his boss with a goal in the 2-1 win over Bournemouth on Sunday afternoon.

Sharp now has two goals in 16 league games for the Blades and says he wants to end his playing days at the South Yorkshire outfit.

He told the Yorkshire Post: “I never got my chance to say my bit about my future, I’d have put it to bed from day one.

“But if someone asked me and I could have got it out in the press, I would have said ‘it does not matter who comes in’.

“I had a lot of interest, which is nice, but I am part of this club and I want to finish my career here.”

Sharp will now be hoping to play his part in the game against Brighton when the two teams meet at Bramall Lane on February 22.