Spurs spread the net in Pochettino’s back four revamp 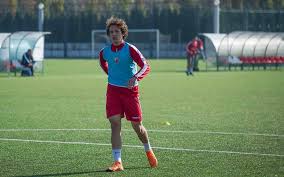 Erakovic is just 18 and known to be one of the most talented players currently affiliated to the Red Star academy, although he did not play against Tottenham in either of the home and away Champions League or Uefa Youth League clashes recently.

This is because the Serbia Under-19 international is on loan at second division side Graficar for the season – which goes to show how deep Spurs are delving to find relatively unknown targets.

That said, Manchester City sent a scout to Belgrade on Saturday, although he was not necessarily present among the 300-strong crowd that witnessed Erakovic’s display in a 3-1 win over Trajal Krusevac.

Both clubs are a little late to pick up a real bargain anyway because the defender has just pledged his commitment to parent club Red Star until June 2023.

“I am delighted to have extended my contract with Red Star,” he said at the weekend. “It is every kid’s dream to sign a contract with a club he has been cheering for his entire life. I hope that with my games I will prove myself to the professional staff of Red Star and that I will play for the first team.”

Erakovic won the Serbian youth championship with Red Star last season before being sent on loan and is the current captain of his country’s Under-19 side.

The Maxbetsport website that originally broke the news of Spurs interest makes two interesting claims – the first being that the interest is long-standing as Pochettino’s men originally tried to sign the teenager in the winter transfer window a year ago.

The other is that he would not require a work permit, which – as Serbia are not in the European Union –  suggests he fulfils other criteria.

Erakovic, however, is expected to get a chance in the first team of Red Star next season and his willingness to commit long-term to the club suggests he has been shown a direct pathway to the first-team.

For many years, rival Belgrade club Partizan have been famed for the success of their youth set-up – but Red Star footballers are attracting increasing scouting attention across Europe.

After selling Bogdan Jocic to Verona for 500,000 euros, it was reported this week that Red Star is well on its way to selling another youngster.