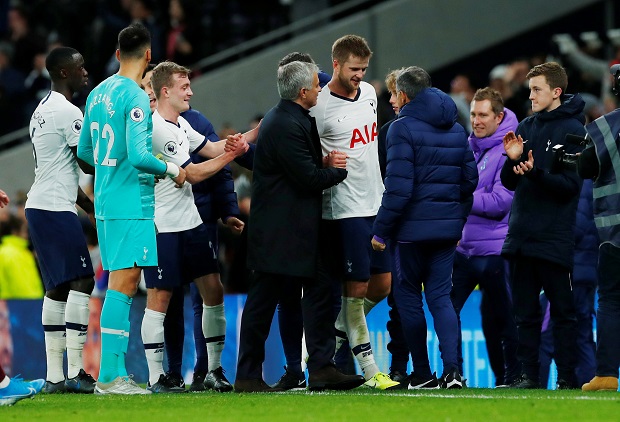 Eric Dier has heaped praise on new Tottenham boss Jose Mourinho after their strong start under his stewardship.

It was regarded as a big gamble with many, believing Mourinho’s habit of spending big money would conflict with Daniel Levy’s preferred running of the club.

However, for now at least, Mourinho has appeared to have got a reaction from his squad after winning four of the first five games in charge, with the 5-0 thrashing of Burnley on Saturday the latest positive result.

Spurs are looking devastating from an attacking point of view after scoring 16 goals in five games across all competitions.

Their recent form has lifted them up to seventh in the Premier League table, and they lie only six points behind Chelsea who currently occupy fourth spot.

In the Champions League, Spurs have also qualified for the last 16 following their 4-2 win against Olympiakos last month.

Dier did not feature much in the opening stages of the season but has become more of a regular in Mourinho’s side, playing in four of the Portuguese tactician’s five games in charge after only playing six times all season prior to that.

And, the England international says he is enjoying working with the three-time Premier League winner.

“We have spoken a lot – both in English and Portuguese! His mentality appeals to me and it is very special,” Dier said.

“It is natural that we have that connection but it is nothing more than that and up to me to perform. I know that if I do perform, like I know I can, I will be able to play.”

Spurs play their final Champions League group game on Wednesday away to Bayern Munich looking to get redemption for the 7-2 battering they took in October.

Then they face a trip to Wolves on Sunday before taking on Frank Lampard’s Chelsea at home the following weekend.