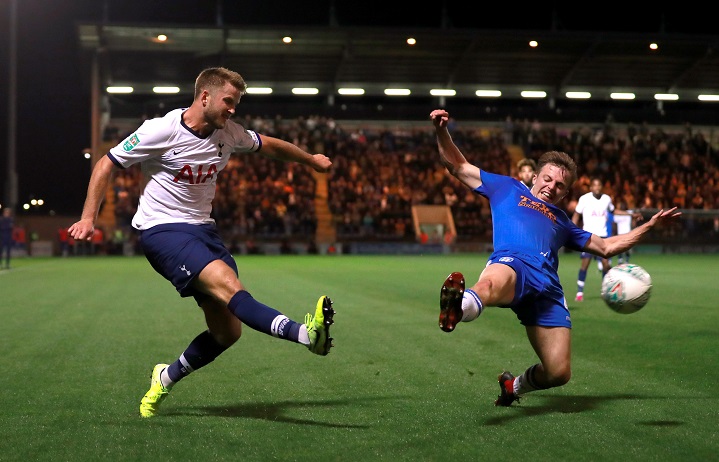 Eric Dier has rejected any suggestion Tottenham have been handed a favourable Champions League draw after being paired with RB Leipzig.

Spurs have avoided the traditional big guns of European football in the last 16 but Dier expects a stern test against the German outfit regardless.

Leipzig finished at the top of the pile in Champions League Group G with 11 points, ahead of French outfit Lyon, Portugal’s Benfica and Russian club Zenit St Petersburg, to reach the knockout stages of Europe’s top tournament for the first time in their short history.

The Red Bull Arena club are also the current pacesetters in Germany’s Bundesliga with 33 points from 15 games.

Dier says he has been keeping an eye on Leipzig’s progress and he believes Spurs will have to be at their best to overcome Julian Nagelsmann’s side.

“I’ve followed their progress quite a lot,” Dier told the club’s official website. “They are a very exciting team, a very young team and an interesting club in the way they do their business. They are an exciting, young team with a lot of quality, and you have to have that to be top of the Bundesliga.

“I’m sure some people will think we’ve got a favourable draw but there is no such thing in the Champions League. We will be well aware of the dangers they possess.”

Dier believes Die Bullen are currently among the “best teams in Europe” and he is looking forward to facing a club he has never come up against before.

Tottenham are at home in the first leg on Wednesday February 19 and the second leg takes place in Leipzig on Tuesday March 10.

Spurs finished as the runners-up in the Champions League last season and Dier feels they can again challenge for the title under new boss Jose Mourinho, stating his side are “embracing” the challenge of their European campaign and their bid to secure a top four finish in the Premier League after a disappointing start to the season.