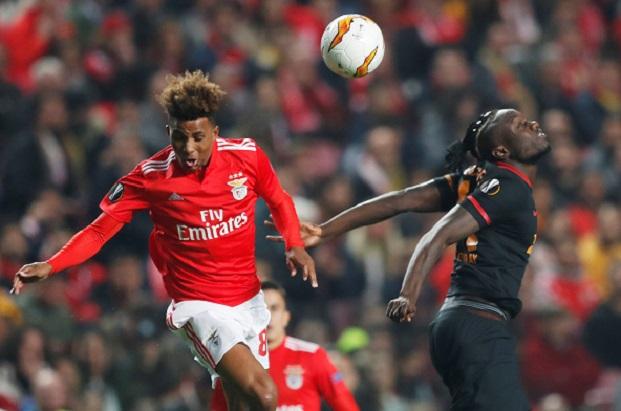 Spurs have signed Benfica's Gedson Fernandes on an 18-month loan deal with a view to a £43m transfer and the midfielder is impressed by the club's facilities.

Tottenham announced they had concluded the deal for Gedson on Wednesday morning and the 21-year-old will now be getting to know the rest of Jose Mourinho’s squad.

He should quickly feel at home in north London because his parents, sisters and their extended family came to live in the capital before he became available on the transfer market.

And Gedson can’t wait to run out at Tottenham Hotspur Stadium after being blown away by the 61,000-capacity arena and the training ground that he has already been shown around.

He told the club’s official website after signing: “I have no words to say about the stadium. I’ve never seen anything like this – it’s unbelievable!

Gedson Fernandes on the new #thfc stadium: "This is amazing. I have no words to say about the stadium because it is fantastic. I have never seen anything like it. It is unbelievable." pic.twitter.com/g0pKxKqGyQ

“The training ground is fantastic too, the people that I’ve met today are fantastic. I know the squad because I’ve watched some games, I have some references like Moussa Sissoko, I know a little bit about Eric Dier because he played in Portugal and I know the coach (Jose Mourinho) because he’s a big coach.”

There will be enough Portuguese speakers in the Spurs dressing room to settle him in, with Dier and the club’s Brazilian international Lucas Moura fluent, although Mourinho’s staff will also be able to use their mother tongue.

“I know about the staff (assistant head coach Joao Sacramento and goalkeeper coach Nuno Santos) a little bit as well because one of my friends last year played at (their former club) Lille, so he spoke with me a little bit about the staff,” added Gedson, who was also interesting West Ham.

The question of when he makes his debut will depend on how his fitness is after a long period out of competitive action for Benfica.

He has started just three senior matches since the end of October and has played only 213 minutes of league action this season, but on the plus side he should be fresh.