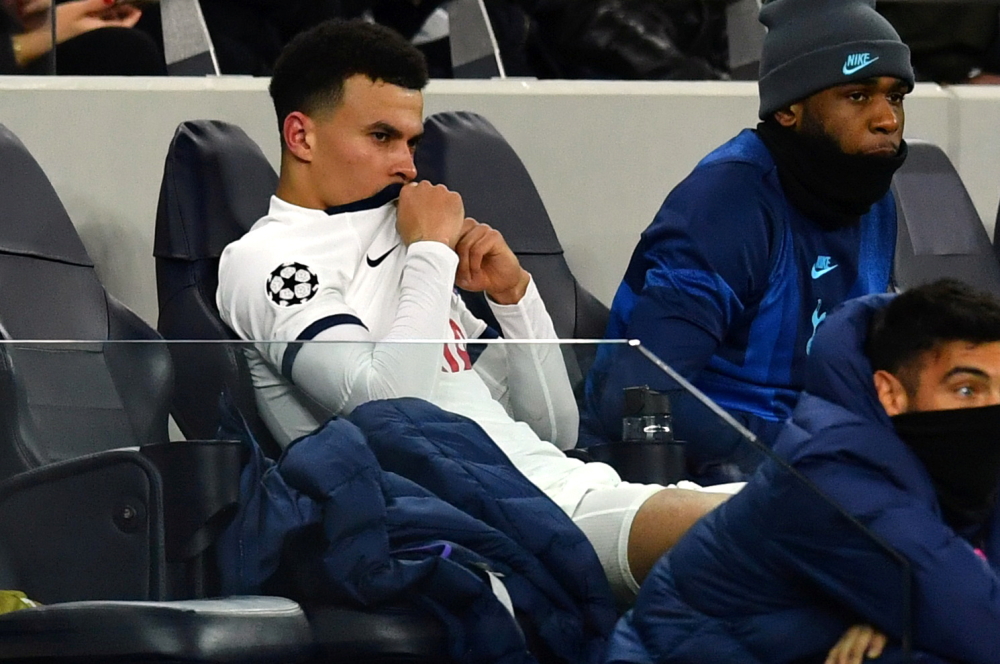 Spurs can't afford to drop Dele Alli due to their injury crisis, but England have the luxury of being able to look elsewhere in the run-up to Euro 2020.

Spurs boss Jose Mourinho caught many by surprise when he decided to take off the 23-year-old off just after the hour mark of Wednesday’s Champions League last-16 first leg against RB Leipzig.

The home side had struggled to create much all night, not helped the absence of Harry Kane and Son Heung-min, but they had little on the bench to suggest they would sacrifice Alli.

However, while the attacking midfielder wasn’t happy to be taken off, Tottenham did improve following his withdrawal, albeit they still ultimately lost 1-0.

🗣 Reporter: “Dele Alli looked angry when he came off?”

🗣 José Mourinho: “I think he was angry with his own performance, not with me. I think he understands why I took him off. And the team improved.” pic.twitter.com/oaV5332Tki

Boss Jose Mourinho was keen to brush off Alli’s reaction post-match and is unlikely to punish him by dropping him for this Saturday’s vital top-four showdown with Chelsea.

His behaviour after being substituted was obviously born out of frustration following a difficult night which extended his recent poor run of form, Alli registering one goal and one assist in his last 10 appearances having failed to build on his strong start to life under Mourinho.

The Portuguese had questioned whether he was coaching Alli’s brother when he first arrived at Tottenham and that got a reaction out of him, the ex-MK Dons youngster scoring four and registering two assists in Mourinho’s first five games in charge.

That kind of form would have likely seen him force his way back into Gareth Southgate’s England team after being dropped for England’s last round of Euro 2020 qualifiers but his dip has left the door open to his Three Lions’ rivals, with the James Maddison of Leicester and Aston Villa’s Jack Grealish leading the charge.

Both men are enjoying more consistent seasons for their club sides than Alli, Maddison scoring nine times and racking up three assists for the Foxes. Meanwhile, Grealish has seven goals and six assists in all competitions for the Villans and is banging on the door when it comes to an England call-up.

They aren’t alone in keeping the attacking midfielder role from Alli with Mason Mount of Chelsea having been named in recent squads, while Liverpool’s Alex Oxlade-Chamberlain was played just in behind Kane in England’s last game, a 4-0 win over Kosovo.

Even Chelsea’s Ross Barkley has an England start to his name more recently than Alli, who has seen his cause hindered by the injuries currently blighting Spurs.

It is tough for a creative midfielder to show his talents when he doesn’t have an out and out striker ahead of him and Alli can point to that as being partly responsible for his drop in production.

Should Kane return to full fitness in time for this summer’s European Championships then it might be worth including Alli based on the pair’s previous performances together. There can be few doubts the duo have a good understanding, forming a deadly partnership together for club and country.

However, Alli will need a little bit more than just history on his side if he is to get into England’s squad for the European Championships and outbursts like his display on Wednesday won’t do him many favours.

Southgate isn’t afraid to make the hard calls and excluding Alli from an England squad for a major tournament would certainly be a surprise, but one that could be justified at this stage in the season.