Hughes refusing to panic at Watford 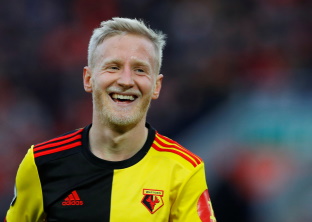 Watford midfielder Will Hughes says his side are taking plenty of positives from their 2-0 defeat to Liverpool on Saturday.

The Hornets remain bottom of the Premier League table, while Liverpool continued their match towards the league title thanks to a brace from Mohamed Salah.

The Egypt international scored either side of half time to give his team all three points, but Watford showed signs of promise under new manager Nigel Pearson.

Pearson, a former Leicester City coach, has urged his team to make Vicarage Road a fortress in the coming weeks as they try to avoid the drop. Watford have only won one game in the league all season and they remain six points behind 17th-placed Aston Villa.

“We are capable, but we've got to start making it happen.” 🗣️

The boss had some strong but positive words post-match on Saturday… #LIVWAT pic.twitter.com/lTpRuXBd0M

The busy fixture list may gave them a chance to kick on, and Hughes says he is confident they can start to turn their improved performances into results.

He told the club’s official website: “It’s downbeat whenever you lose a game, and we’re in a tough position at the moment. We can’t keep saying we deserve something; we have to go out and win games.

“We’re bottom of the table so there’s a whole host of little things that have to change on the pitch and hopefully with the new gaffer we can start doing that.

“It’s not even half the season gone yet, we’re in a very difficult position, and we know that, but we’ve got the quality. So as long as the commitment and work rate is there, we will start turning it around.”

Watford already have a -23 goal difference this season and Pearson is their third manager already after Javi Gracia and Quique Sanchez Flores were sacked.

Pearson’s men face Manchester United this weekend before tackling Sheffield United on Boxing Day. They then take on relegation rivals Aston Villa and Wolves, with both of the games on home soil.