Watford defender Wilmot says Pussetto will be a good signing 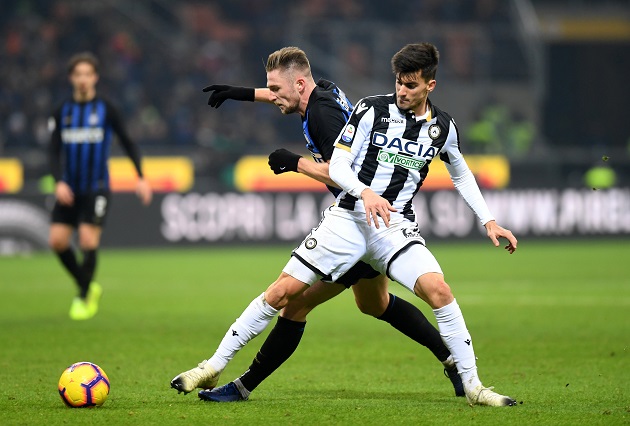 Ben Wilmot believes Ignacio Pussetto will prove to be a fine acquisition for Watford after joining from Udinese.

The 24-year-old winger joined the Hornets from sister club Udinese on Wednesday afternoon for an undisclosed fee believed to be around £7million.

He penned a four-and-a-half-year contract with Nigel Pearson’s improving side, who are looking to avoid relegation from the Premier League.

Pussetto will compete for a place in the Hornets’ side with Ismaila Sarr, who was the club’s record purchase in the summer after joining from Rennes for a fee in the region of £30million, and star man Gerard Deulofeu.

Watford defender Wilmot, who is currently on loan at Swansea City in the Championship, played with Pussetto while on loan at Udinese last season.

The England under-21 man is confident the Argentinian can step up and fit in well in the Premier League.

“He’s lively and will bring energy to the team,” Wilmot told Watford’s official website. “He can play on the wing, down the middle, is decent with both feet, a good finisher and will shoot on sight.

“He’s got pace about him and is a decent tricky little player. He’s a bit different and has got a bit of everything. He’s not lightning quick like Gerard [Deulofeu], but he’s got energy and works really hard.”

Pussetto scored once in 14 matches for Udinese this season before making the move to England.

He spent 18 months with the Serie A outfit after joining from Huracan in his homeland in the summer of 2018.

Pussetto is the first signing in the January transfer window for Watford in what is expected to be a busy month at Vicarage Road.

Nigel Pearson has made an instant impact with the club having picked up 13 points from a possible 18 in six Premier League outings, with a 3-0 win at Bournemouth extending that run on Sunday.

Watford’s next match is at home to Jose Mourinho’s struggling Tottenham, Hotspur on Sunday where their new capture will hope to make his debut.