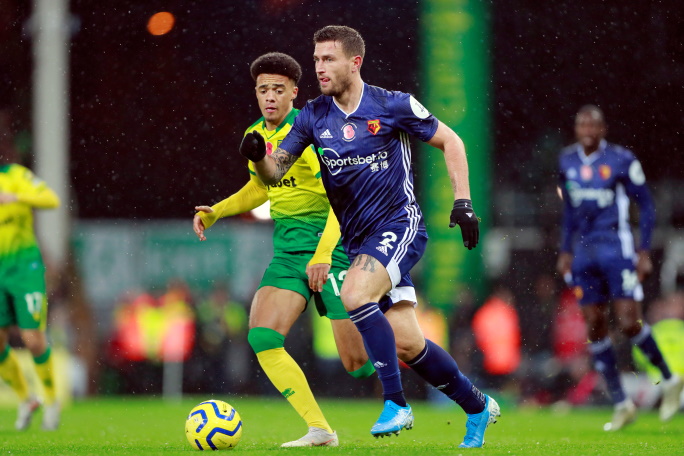 Watford right-back Daryl Janmaat has claimed his side need four more wins at least if they want to retain their place in the Premier League.

The Hornets are 19th in the table but they still have a realistic chance of avoiding relegation under coach Nigel Pearson.

Watford have picked up 24 points from their first 27 matches and are currently two points from safety.

With 17th-placed Aston Villa not playing this weekend due to their EFL Cup final, Watford can climb out of the bottom three on Saturday.

However, to do so, they need to beat table-toppers Liverpool at Vicarage Road. Watford head into the game on the back of a 3-0 defeat to Manchester United and their last win came on January 12.

Pearson’s troops know a win this weekend will be unlikely but Janmaat says they need to get their act together as they prepare for future fixtures against Crystal Palace, Leicester City, Burnley and Southampton.

He told the Watford Observer: “We know there’s 11 finals left and we have to probably take four or five more wins, maybe, 12 or 15 points more.

“We have to make sure we can do that. We have enough opportunities because we have some games left at home against teams around us and they are the games that we have to win, there’s no excuses.

“I’m confident that we have enough quality to stay up, but it’s not only about quality, but it’s also about everything around, and we have to keep the heads cool and make sure we will take it game by game and get the points that we really need.”

“We don't have any injury doubts for this week.” 🙌

The all-important team news ahead of #WATLIV.

Watford’s squad will nearly be at full strength this weekend, with Janmaat set to be the only player not in contention. The former Newcastle United defender is hoping to be back for the clash with Palace.