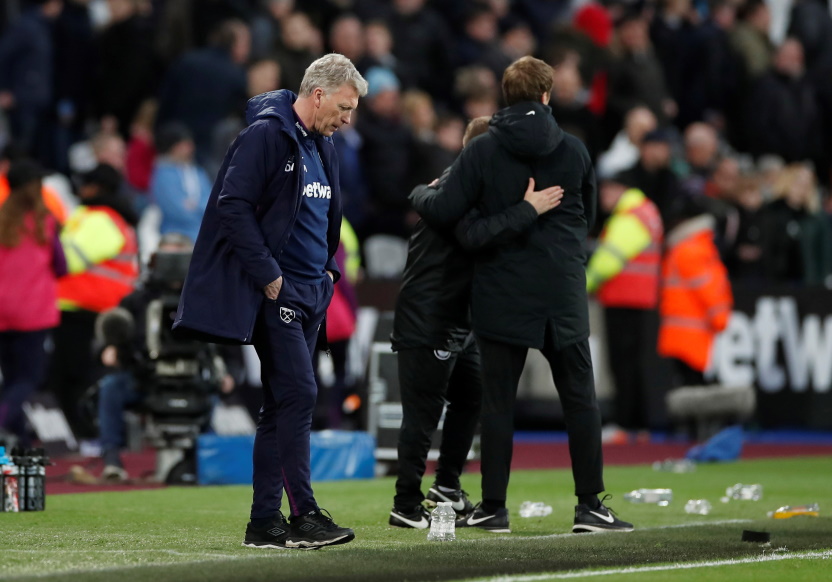 David Moyes could not hide his anger and blasted his West Ham players for the errors that cost his side a crucial three points on Saturday afternoon.

Speaking after the game, the Hammers boss was fuming with the catalogue of errors which gifted Brighton a 3-3 draw and left his side in the drop zone.

The Hammers’ nemesis Glenn Murray scored a controversial late equaliser, his seventh career goal against West Ham, as Brighton snatched a crucial point at the death.

The ball appeared to hit Murray’s arm before he fired home but a VAR check decided otherwise, to disbelief in the stands when the replay was shown.

However, Moyes refused to blame VAR and instead he hit out at his players for not defending properly and clearing the ball away.

West Ham were 2-0 up through first-half goals from Issa Diop and Robert Snodgrass, but gifted Brighton a way back in when Lukasz Fabianski punched a corner onto the shoulder of defender Angelo Ogbonna and conceded an own goal.

Snodgrass restored the two-goal cushion but then a defensive horror show from Diop and Fabianski allowed Pascal Gross to nip in and score.

Murray’s moment arrived in the 79th minute and a lengthy VAR review eventually showed the ball had not touched his hand before he swept it in at the far post.

Brighton were only denied a late winner by Fabianski’s save from Solly March and Moyes did not hold back after the game.

“We gave them a leg-up for 3-1 with the own goal, and we gave them a massive leg-up with 20 minutes to go,” he said. “I’m angry and the players know I’m disappointed. Their effort was huge. I just feel playing Liverpool on Wednesday night and fatigue played a part in the second half.”

A draw meant West Ham slipped into the relegation zone and with trips to Manchester City and Liverpool next up, it might be a while before they climb back out.