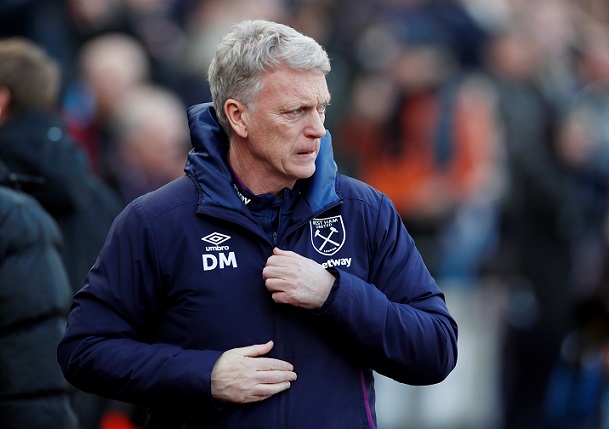 West Ham manager David Moyes has full belief his side will get out of relegation trouble as they prepare to face Manchester City on Wednesday.

It has been a difficult season for the Hammers who have failed to impress despite spending big money in the summer, breaking their transfer record to sign Frankfurt forward Sebastien Haller.

Manuel Pellegrini lost his job in December with the club 17th in the table having lost nine of their previous 12 games.

David Moyes was the man selected to take charge for a second spell having guided the club to safety in the 2017-18 season after succeeding Slaven Bilic.

However, things have not gone as smoothly for the Scotsman since arriving at the London Stadium for the second time.

Moyes’ second debut got off to the perfect start after the Hammers thrashed fellow strugglers Bournemouth 4-0 at home on New Year’s Day.

However, since then they have yet to register a win in five Premier League games and have slipped into the bottom three as they lie one point behind 17th place Aston Villa.

The boss' latest team news ahead of #MCIWHU 🗞

West Ham were also dumped out of the FA Cup in the fourth round after losing at home to Championship outfit West Brom 1-0.

They prepare to travel to Manchester City on Wednesday having had an extended winter break due to the recent bad weather in the UK.

Storm Ciara meant the fixture was postponed on the initial date of February 9, meaning Moyes’ team have not played for two-and-a-half weeks.

Speaking to the press ahead of the rearranged match with Pep Guardiola’s team, the 56-year-old says he is adamant his side will soon pick up points.

“I’m more than confident we will climb the table.”