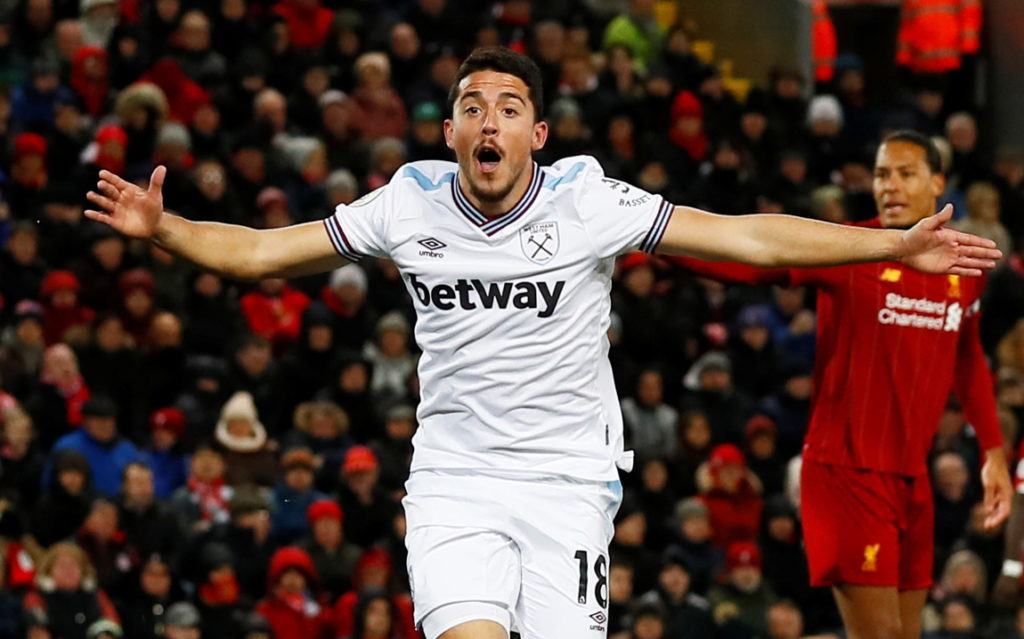 Pablo Fornals believes West Ham can take plenty of heart from their display at Liverpool but stressed the whole club must now come together to fight relegation.

The Hammers were narrowly beaten by the runaway Premier League leaders on Monday, going down 3-2 at Anfield after leading 2-1 at one point in the second half.

“When I scored, I wanted to go to our fans. Every single day, they support me. Thank you to all our supporters, who never stopped. We need them every time and it is because of them we have belief.”

David Moyes’ side, who fell behind to a Georginio Wijnaldum header inside the first 10 minutes, recovered well and equalised through Issa Diop before Fornals put them in front after the break.

Despite sitting in the relegation zone, the visitors continued to compete well and were only undone when Lukasz Fabianski let a soft Mo Salah shot squirm under him while Sadio Mane eventually tapped home the winner for the Reds with nine minutes left.

Fornals acknowledged there were plenty of positives to take from the performance but the result ultimately means a relegation scrap looms in the remainder of the season.

“I think it’s not easy to come to the club that is first in the Premier League and fight on such an open pitch, but we did it,” Fornals told West Ham TV. “We fought an amazing match, but they won the game, which is what matters.”

Moyes’ side now host Southampton on Saturday before big games against Arsenal, Wolves and Tottenham next month which they will hope to get something from as they sit 18th in the table, level on points with Watford directly below them and one point behind Aston Villa who are currently one place in front.

Fornals says everyone at the club must do their bit to ensure the Hammers survive as the run-in begins to loom large on the horizon and he’s sure with a good collective spirit they can achieve it.

He added: “We’re all in this This is a thing for West Ham, the coach, the players, the fans and for the whole club. To do this job, it will take everyone involved with West Ham. I am so confident that we can do it. We need to keep together and fight as a club to do it.”