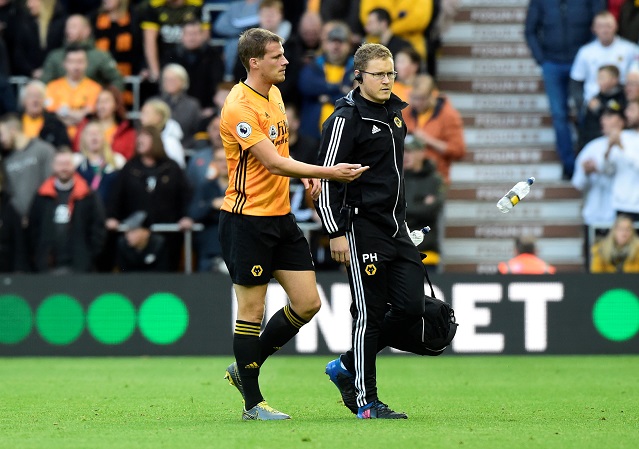 Both Wolves and Sheffield United will be looking to maintain their impressive recent runs when they meet at Molineux in the Premier League on Sunday.

The two teams are riding high in the top-six of the standings, with Wolves sitting a place and point above the Blades following a run of just one defeat in their last 14 across all competitions.

Sheff United are also proving hard to beat of late, as they have not tasted defeat in six, while their away record is particularly impressive, with their last loss on the road coming against Swansea in January.

Wolves secured progress through to the knockout stages of the Europa League on Thursday thanks to their 3-3 draw in Portugal against Braga, which means boss Nuno Espirito Santo may opt to rotate his starting line-up.

One man that definitely won’t feature on Sunday is defender Romain Saiss, who is suspended after picking up his fifth yellow card of the season against Bournemouth last weekend.

However, Ryan Bennett could come in as a straight replacement for the Moroccan, as he is closing in on a return from a groin problem, although Morgan Gibbs-White is unlikely to feature due to a back injury and Willy Boly is still sidelined with a fractured leg.

Sheff United will be boosted by the return of goalkeeper Dean Henderson, with the Manchester United loanee having been ineligible to face his parent club last weekend.

Defender John Egan is also expected to return following a bout of concussion, while boss Chris Wilder has confirmed that forward Lys Moussett is fit enough to feature despite pulling up with a hamstring problem during last weekend’s thrilling 3-3 draw with the Red Devils.

These two sides met in League One as recently as 2014 and it is Wolves that have dominated the fixture of late, as they have won three of the last four clashes, with the Blades’ last win at Molineux coming in October 2002.