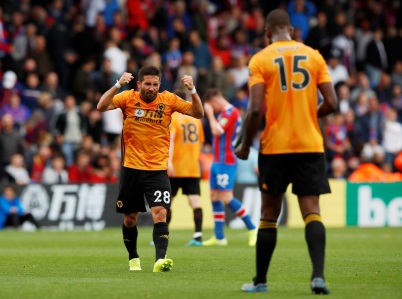 Moutinho, who had been due to fall out of contract at Molineux at the end of the season, signed a new contract at the club earlier this month and is now tied down until 2022.

The 33-year-old joined Wolves in the summer of 2018 after they secured promotion from the Championship from Ligue 1 giants Monaco for an undisclosed fee, reported to have been in the region of £5million.

The Portugal international managed 38 appearances in the Premier League last term and has played the full 90 minutes in all 13 of their league games this season.

2 – Joao Moutinho is the first Wolves player to provide two assists in a Premier League game since Kevin Doyle versus Swansea in April 2012. Strings. #WOLLEI pic.twitter.com/uLBFxI9TjT

Manager Nuno says he is “very pleased” the midfielder has decided to commit his future to Wolves.

He believes Moutinho is crucial both on and off the pitch for his side as he “transmits all this prior experience he had through the years” to his team-mates.

Nuno told the club website: “Joao is a European champion [with Portugal in 2016], so these things he gives to the young lads is really, really amazing, so we are thankful and pleased.

“It is part of the philosophy of the group; we integrate the new ones, help transmit your experience, but at the same time, the young people also give us a lot of teaching. This is also a learning process, so it’s this mix – the way they gel, the way they work among them is amazing and this is the strong point we have as a group.”

Moutinho has managed one goal in the Premier League this season in the 2-1 win at Bournemouth in the last round of fixtures, while he has a further three assists.