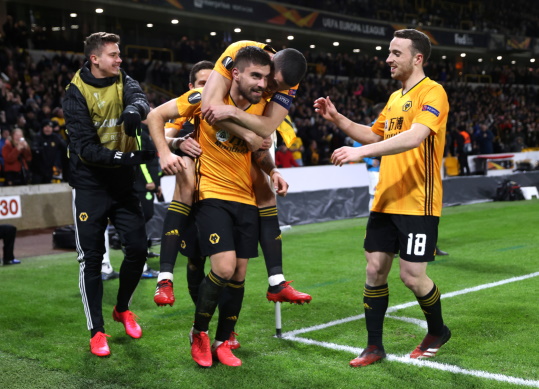 Wolves playmaker Ruben Neves has refused to discuss talk of Champions League qualification despite the club's strong position at present.

The Midlands outfit are eighth in the Premier League table, and just five points separate them and the top four.

Nuno Espirito Santo’s side are only two points behind fifth-placed Manchester United, but the Red Devils have enjoyed an upturn in fortunes of late.

Wolves can still qualify through the Premier League but they also have the chance of winning the Europa League this year, which is another route into the competition.

Neves played his part as Wolves thrashed Espanyol last week in the first leg of their last 32 tie, with Nuno’s men walking away with a 4-0 win at Molineux.

The Portugal international scored a stunning goal during the rout, but he has refused to get carried away ahead of the return leg.

Espanyol sit bottom of LaLiga, but Neves says his team cannot afford to think too far ahead, with Champions League qualification still a distant dream.

“We can’t talk about it at this moment. It’s a very good moment, but we have our feet on the ground,” he told reporters.

“We know what we’re capable of, but we have to be focused on our competitions to keep our pace. It’s not fair to think about it at the moment. Our philosophy is always game-by-game. After we’ll look to the Premier League, it’s not the moment to speak about the Champions League.”

Wolves will travel to Barcelona without wing-back Jonny Castro, with the fan favourite struggling with an ankle injury.

After Thursday’s meeting in Spain, Wolves travel to north London to take on Tottenham Hotspur.