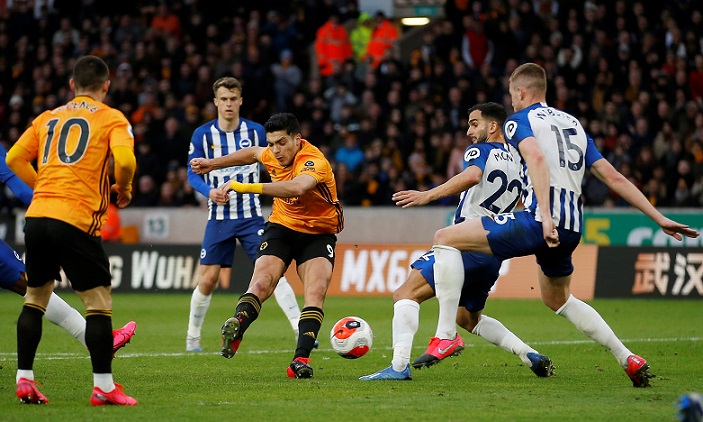 Striker Raul Jimenez says he has no plans to leave Wolves in the summer amid rumours linking him with clubs in the Champions League.

The Mexican forward has been an inspired signing for the ambitious Black Country club since making the move at the beginning of last season.

Initially joining up on loan from Portuguese outfit Benfica, he scored 17 goals across all competitions as Wolves secured a place in the Europa League at the first attempt after earning promotion from the Championship.

That form was enough to convince Wolves to spend £30million to sign him on a permanent basis and his stock has continued to rise in the Premier League.

This season he has scored 22 goals in 44 games across all competitions as Wolves battle to qualify for the Europa League once again.

Jimenez has been linked with moves away from Molineux, with the likes of Arsenal, Manchester United and Tottenham all credited with genuine interest in the forward.

Real Madrid are also rumoured to be watching him as they search for a long-term replacement for Karim Benzema.

However, speaking to fans in a Facebook Live session, the striker says he is happy to honour his contract at Wolves, which lasts until 2023, but admits playing in the Champions League is a tempting proposition.

“It’s not that we have to qualify for the Champions League in order to stay. I’m good [here], happy with Wolves, doing important things – me as well as the whole team,” he said.

“It’s the big motivation to keep growing as a player and getting into the Champions League is always a plus that satisfies you and keeps you thinking about big things.”

Before the season was halted due to the coronavirus pandemic, Wolves were sixth in the Premier League table, five points adrift of Chelsea in fourth.

They were also competing in the Europa League’s round-of-16 stage but the second leg of their tie against Olympiakos could not be played.