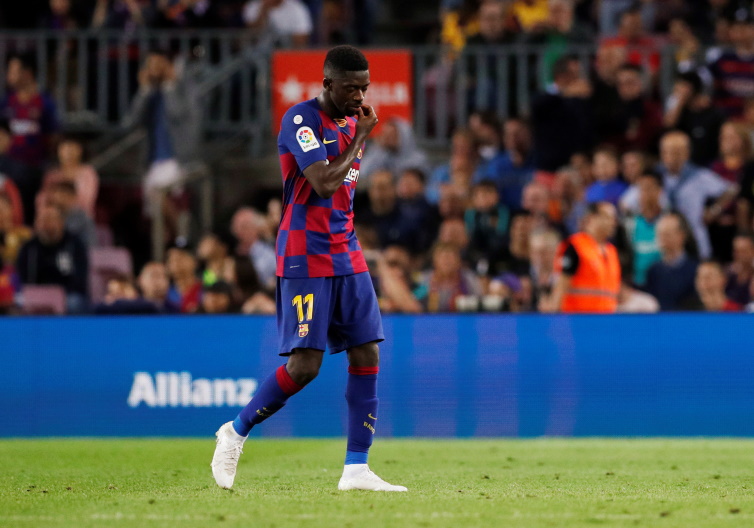 France boss Didier Deschamps has warned Ousmane Dembele he's in danger of ruining his "incredible potential" if his performances for Barcelona don't improve.

Deschamps announced his squad for the reigning world champion’s upcoming Euro 2020 qualifiers on Thursday and Dembele was missing from the 23-man list.

The 22-year-old has yet to feature for Les Bleus in their Euro 2020 qualifying campaign having been left out of the squad for October’s clashes with Iceland and Turkey due to his poor performances for Barcelona.

Deschamps was hoping to see an upturn in his fortunes for the former Borussia Dortmund wideman after his omission but has been disappointed, Dembele missing Barca’s last three La Liga matches.

Dembele was suspended for two of those games after his sending off against Sevilla before head coach Ernesto Valverde surprisingly left him at home for Saturday’s 2-1 loss at Levante.

The Frenchman made his return on Tuesday night in the Champions League clash with Slavia Prague but failed to fire as the Czechs held the Spanish champions to a goalless at the Nou Camp.

Deschamps has now called upon Dembele to show what he is capable of if he wants to earn a recall to the national side after a disastrous 2019/20 campaign, believing he is capable of much better.

“Ousmane has incredible potential, that he makes sure that he does not ruin everything he is capable of doing,” said Deschamps.

“We have the right to wait more than he has done lately. to do everything possible to get as high as possible, whether on or off the field, he is a serious candidate to be on the list, and in recent times he is still far from his best.”

Dembele made the switch to the Nou Camp from Borussia Dortmund in 2017 but has failed to live up to his £112million price tag since the move and was heavily linked with a move away in the summer. This season, the forward has managed just six appearances, scoring once.