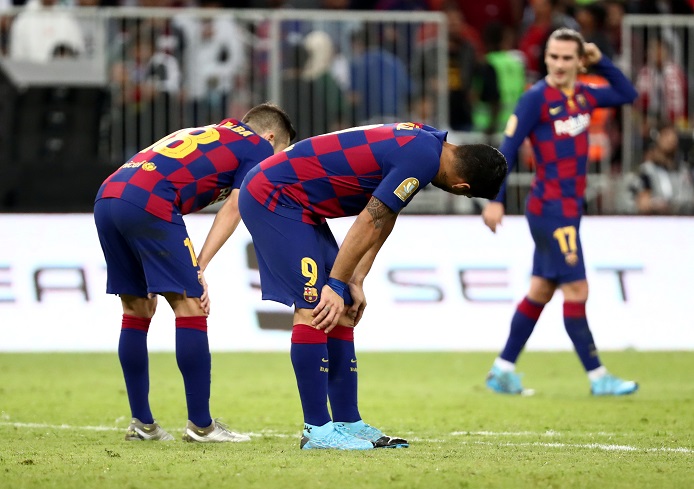 Barcelona expect to be without Luis Suarez for around four months after the club confirmed he underwent a knee operation on Sunday.

Uruguay international Suarez completed 90 minutes in Barca’s 3-2 defeat by Atletico Madrid on Thursday, which saw them exit the Spanish Super Cup in Saudi Arabia, but scans after the match revealed an issue with his right knee.

The 32-year-old forward was operated on this Sunday by Dr. Ramon Cugat, who used keyhole surgery to resolve an injury to the external meniscus of the right knee by performing a suture.

Suarez, who underwent surgery on the same knee last May, which forced him to miss the Copa del Rey final defeat to Valencia, is now set to miss the next four months of action, ruling him out for the majority of the remainder of the campaign.

The former Liverpool star has scored 14 goals from 23 games in all competitions this season – 11 of those coming in the league as he sits third in the scoring charts – while he leads the assist charts with seven to his name.

Barca have no natural replacement for Suarez at centre-forward, meaning France international Antoine Griezmann may have to play in the role unless the team decide to sign a striker before the transfer window closes on February 1.

The Catalans are currently top of La Liga on 40 points, only ahead of second-placed Real Madrid on goal difference, and there are huge doubts surrounding the future of manager Ernesto Valverde.

Ex-Barcelona midfielder Xavi Hernandez admitted he would love to coach his former employers after meeting with officials of the Spanish outfit in the last few days.