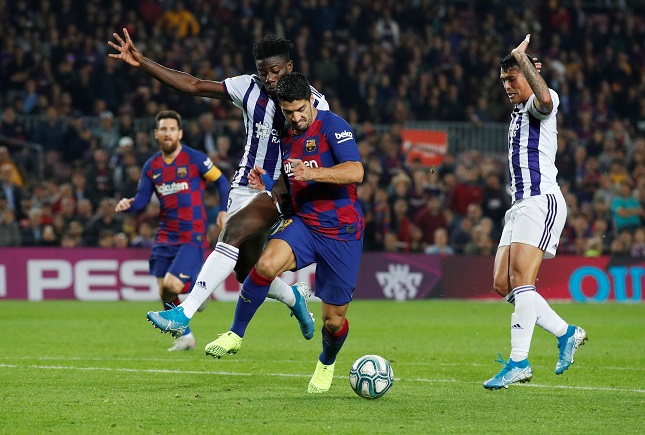 Barcelona have been boosted as key striker Luis Suarez could return to action before the end of the season.

The Catalan giants were rocked by the news that Suarez was looking at a lengthy spell on the sidelines after picking up a knee injury that required surgery.

Early reports suggested that the former Liverpool striker could be forced to sit out the remainder of the season as Barca go in search of La Liga and Champions League glory.

That would have been a huge blow for the club, who opted against bringing in another striker during the January transfer window to replace him, but they look to have received some good news.

Reports have claimed that Suarez is making a speedier than expected recovery and could play again this season.

No date has been given and Barca have yet to comment on the rumours but it would be a huge boost if he was to be available to play some part in the season run-in as Barca chase silverware.

Barcelona are hopeful that Luis Suarez can return from injury to play in the second leg of the Champions League semi-final and the last four La Liga games this season, according to sources close to the club 🤞 pic.twitter.com/bspw9IAnhF

Suarez is said to be walking normally after ditching the crutches and will step up his rehabilitation after passing his latest medical review with flying colours.

Barca have had some horrid luck on the injury front and have just lost Ousmane Dembele for six months, so news that Suarez could figure again this season, will give the whole club a lift.

Suarez scored 14 goals in 23 appearances prior to his injury and Barca could need that kind of form in front of goal if they are to finish the season on a winning note.