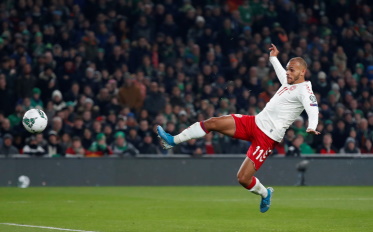 New Barcelona signing Martin Braithwaite says he cannot wait to team up with Lionel Messi as he tries to silence his critics after his move from Leganes.

The former Middlesbrough forward signed for Barcelona on Thursday, with the Spanish giants given special dispensation to sign a player after injuries to Luis Suarez and Ousmane Dembele.

Suarez underwent knee surgery at the start of the year, while Dembele broke down with a muscle issue earlier this month.

The former Borussia Dortmund winger has endured another stop-start campaign and Braithwaite is hoping to fill the void.

The 28-year-old has earned the move after scoring eight goals in 27 appearances for Leganes, with Barcelona meeting his £15million release clause.

💬 A message from @MartinBraith for all the Barça Fans pic.twitter.com/cgltXXl0DB

“It’s a club with a lot of pressure, a lot of expectations, and I’m here to go and try to win everything possible.

“I’m a technical player, always physical in that I’m really fast, really strong. I’d say my best attribute is my intelligence. I move really intelligently. I study the game. I call myself a football student.

“I think, the way we play here, my movement will help the team a lot. And, of course, I’m a goalscorer, so I’m here to score goals.”

Braithwaite may make his debut this weekend as Eibar travel to the Camp Nou, while Setien’s men face Napoli on Tuesday, February 25 in the first leg of their Champions League last-16 tie.