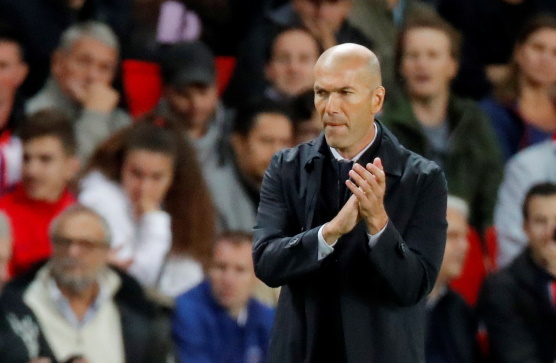 Real Madrid must become more clinical with their efforts at goal after edging a 1-0 win over Real Valladolid, according to manager Zinedine Zidane.

Los Blancos managed to secure the win to take them three points clear at the top of the table but they did not make it easy for themselves on Sunday.

A 78th-minute header from Nacho proved to be the difference between the two sides as Real went ahead of arch rivals Barcelona, who lost 2-0 at Valencia in their game Saturday, in the standings.

Zidane was full of praise for the defensive work of his side, as they managed to deny Valladolid a single shot on target.

It was a good night in Valladolid! Click the photo to watch the highlights. 👇 #RMLiga

However, the former France international feels his team can do so much more in the attacking department and has urged them to improve.

“Defensively, what we are doing, we are doing well. It is our strength,” Zidane told reporters. “We defend all and when we lose the ball we recover it very high, and if we keep it we have a good chance of scoring.

“Nacho scored and that is part of football. We know that we can improve in this aspect. Nacho is a professional. When he has to compete he does well. I’m glad for his goal; he doesn’t usually score them but from time-to-time we can also create chances for defenders.”

Madrid’s next game at the Santiago Bernabeu, after a trip to Zaragoza in midweek, comes against city rivals Atletico Madrid on Saturday.