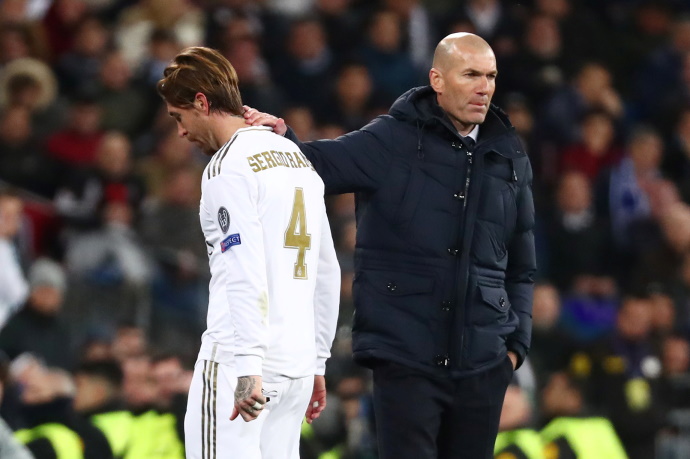 Real Madrid coach Zinedine Zidane says their Champions League campaign is far from over but for now they must regroup for El Classico this weekend.

Manchester City came from behind to claim a famous 2-1 win at the Bernabeu in the first leg of the Champions League last-16 tie, and Real now have it all to do in the second leg at the Etihad Stadium.

Gabriel Jesus and Kevin De Bruyne, the latter from the penalty spot, scored in the last 12 minutes as City responded in brilliant fashion to Isco’s 60th-minute opener.

Real’s night got even worse when captain Sergio Ramos was sent off – for the 26th time for the club – for denying Jesus a goalscoring opportunity late on.

Before the second leg they have to recover quickly for their top-of-the-table La Liga clash with Barcelona on Sunday, and Zidane will be focused on that for now.

However he says they have what it takes to turn the 2-1 City deficit around when the time comes.

“I’m not happy that we played well but with 10 minutes left, we changed and made errors which hurt us,” Zidane said. “We didn’t deserve it but this is football. We needed 90 minutes of total concentration, especially against a team like City.

“But we know that there’s half this tie left and now it’s simple – we have to go to City and win. On Sunday we have another opportunity. It’s a big match and right now we have to recover properly and perform great.”

Meanwhile, City boss Pep Guardiola is not counting his chickens either and says his side have plenty of work to do still to book their place in the quarter-finals.