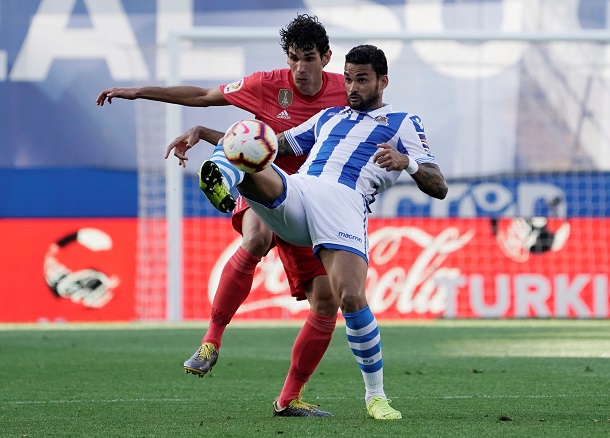 Real Sociedad president Jokin Aperribay insists Barcelona have not made an approach for striker Willian Jose.

Former Brazil Under-20 international Jose attracted huge interest during the January transfer window and there were reports claiming he had been offered to Premier League rivals Tottenham Hotspur and Manchester United, who both failed to sign him.

The 28-year-old has been in impressive for Sociedad this season, scoring eight goals from 21 La Liga appearances to help the club climb to eighth in the table, just five points adrift of fourth-placed Sevilla, who hold the final Champions League position.

Defending La Liga champions Barcelona have been hit by injuries in the final third, with Luis Suarez and Ousmane Dembele both on the sidelines, and manager Quique Setien is desperate to bring in reinforcements to help his side.

Although the January window is closed, the Catalans are thought to be confident they can secure special dispensation from authorities to recruit an extra striking option.

If Barcelona can prove Dembele’s injury rules him out for the rest of the season, they will be allowed to sign a player who is either playing in Spain or who is currently out of contract, but any signing would not be able to play in the Champions League.

Reports claimed the Spanish giants had made an approach for Jose but Sociedad president Aperribay insists there has been no contact.

“We haven’t had any conversation with anyone,” he told Radio MARCA. “I don’t know what will happen. I haven’t read about it but it is true that the market has closed. I can’t comment much.

“Willian Jose is a player who has attracted interest from several teams in the winter [transfer window] and we all know that Barcelona are looking for a striker. I don’t know if they’ll call us but they haven’t done it yet. He is an important player for us and we would definitely miss him.”