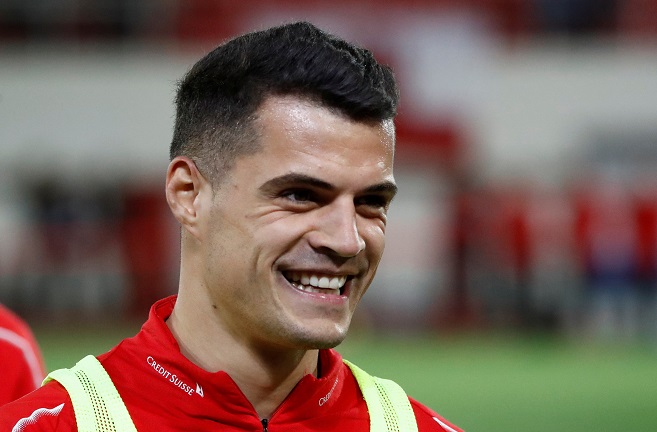 Inter and AC Milan are reportedly keen on signing Arsenal's wantaway midfielder Granit Xhaka in the summer, according to reports.

Xhaka’s Arsenal future looks almost certain to come to an end sooner rather than later after his angry outburst at being substituted in their 2-2 draw against Crystal Place at the end of October.

Despite explaining his side of the story, the Swiss international was still stripped of the captaincy by manager Unai Emery and has not played for the club since that day.

His name has cropped up regularly in the gossip columns since that debacle and now it appears there will be a tug of war between the Milan clubs for his signature.

Inter are currently having a great season as they lie second in Serie A after 12 games, and are only one point off Juventus at the top.

AC Milan are having a much more turbulent campaign after sacking manager Marco Giampaolo in October.

They replaced him with Stefano Pioli and are currently 14th in the table and looking unlikely to make a European challenge.

Granit Xhaka on the scoresheet for Switzerland this evening. ⚽️ pic.twitter.com/4FfTW2uI8t

However, both are gunning to sign Xhaka, who has made 107 appearances for Arsenal since making the £35million move from Borussia Monchengladbach in 2016.

Inter boss Antonio Conte is understood to be interested in signing Xhaka in order to increase depth in the squad and keep them close to Juve in the title chase.

Pioli is thought to want the 27-year-old at the San Siro in order to provide experience and guidance to their very young squad.

The report does not indicate whether either club would want to do a deal on a permanent basis or agree a loan move for the player.