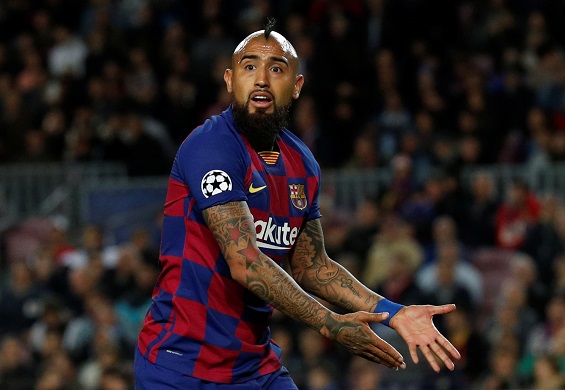 Inter Milan CEO Beppe Marotta has hinted a January offer could be made for frustrated Barcelona midfielder Arturo Vidal.

Chile international Vidal left Bayern Munich in August 2018 to join Spanish champions Barcelona on a three-year contract and he was a regular first-team fixture during his first season, featuring in 33 La Liga games and scoring three goals.

However, the 32-year-old has fallen down the pecking order at Camp Nou in the current campaign, starting just three league games, and he recently revealed he could look to move away from the club if he “doesn’t feel important”.

Numerous reports are claiming the midfielder will be loaned out in January or sold permanently and Italian giants Inter are said to be leading the race for his signature.

Inter coach Antonio Conte has praised Barcelona's Arturo Vidal amid transfer speculation linking the midfielder with a move to the Nerazzurri. The pair worked together for three years at Juventus, winning three successive Scudetto together at the Al.. https://t.co/XLQWN2DneV

Vidal, who has built a reputation of a tough tackling midfielder over the years, worked under current Inter boss Antonio Conte at Juventus between 2011-2014 and Marotta has hinted the duo could be reunited in the new year.

“He is an important player on the world stage and both Conte and I are tied to him because of our great past together,” he was quoted as saying by Sky Sport Italia.

“We have great considerations of him. I think a lot of teams would like to sign him, but unfortunately he’s at Barcelona. However, thoughts can certainly be made.”

It is thought an offer around £13million will be required for Inter to land the midfielder, whose current contract runs out in the summer of 2021.

Inter, who are on a four-game winning run in all competitions, return to action on Friday when host Roma.