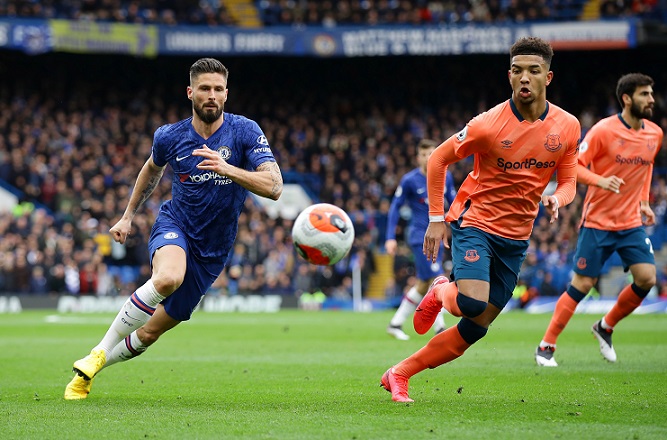 Chelsea forward Olivier Giroud has admitted he wanted to move to Inter Milan in January.

The ex-Arsenal forward was constantly linked with a move away from Stamford Bridge during the January window due to his lack of game time under Frank Lampard.

The Frenchman found himself largely relegated to the bench in favour of young academy product Tammy Abraham, as Chelsea sought to rebuild following a transfer ban.

However, the 33-year-old has broken back into the team in recent weeks following injuries to Abraham and has performed admirably.

He has scored twice in his last six games for the Blues and led the line well as Lampard’s men aim to qualify for the Champions League at the end of the season.

Inter were strongly linked with a switch for Giroud in January as Antonio Conte wanted to strengthen his forward options.

Conte ultimately didn’t get his man as Chelsea were reluctant to let Giroud go while Abraham was on the sidelines.

Another great team performance today 💪🏼👍🏼
Thanks for your support! 🙌🏼🙏🏼#CHEEVE #CFC pic.twitter.com/JGpN5DHlTE

Reflecting on January, Giroud admits he was disappointed not to get a move away from Chelsea and says he had plenty of options but that Inter were a “priority”.

Speaking to Telefoot via AS, Giroud said: “I saw myself elsewhere after experiencing six complicated months. I did everything to leave – it’s true.

“Inter was the priority, and there was also contact with Lazio and Tottenham. But circumstances meant that Chelsea blocked it. It was not my choice.”

The Nerazzurri are currently third in the Serie A table, seven points adrift of Lazio in top spot.

However, due to the coronavirus, there is plenty of uncertainty on how the remainder of the season is going to pan out.