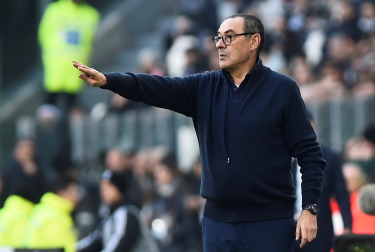 Juventus manager Maurizio Sarri says he can handle the pressure in Turin despite calls for him to lose his job after a poor run of results.

The 61-year-old has seen his side lose two of their last three matches in Serie A, leaving them second in the table.

Juventus are level with Inter Milan on points, but Antonio Conte’s side have the superior goal difference after the first 23 matches.

Sarri’s side lost to his former club Napoli before responding against Fiorentina, but they were brought back down to earth when they surprisingly lost to Hellas Verona on Saturday.

Speculation suggests Pep Guardiola or Massimiliano Allegri could soon replace the ex-Chelsea boss at the Allianz Stadium, but Sarri says he is ready for the fight.

He told reporters ahead of the Coppa Italia semi-final first leg against AC Milan on Thursday night: “If I didn’t want to face examinations I would’ve taken a job at the post office. This is the job.

“We are on target to reach the objectives we set out at the start of the season. Of course on matches were things go wrong there are reflections to be made.”

Recent reports suggested Sarri met with club president Andrea Agnelli for ultimatum talks after the defeat to Verona. The former Chelsea boss has since countered those claims by insisting they were always due to meet for dinner.

Sarri’s men return to league duties on Sunday against Brescia before they face a massive week towards the end of the month.

They face Lyon in the first leg of their last 16 tie in the Champions League on February 26, before welcoming Inter to Turin on March 1.