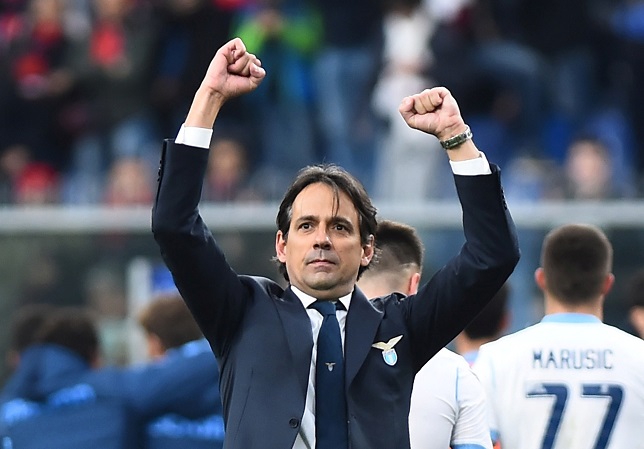 Lazio manager Simone Inzaghi says the togetherness of his squad is the reason why they are only one point off the top of the Serie A table.

The Rome-based outfit are having a storming season and have not lost a top-flight game since September 25 after going down 1-0 against Antonio Conte’s Inter Milan.

Since then, they have embarked upon a 20-match unbeaten run in Serie A, which included an 11-match winning streak between October and January.

That run of form continued on Sunday as they overcame Genoa in a hard-fought 3-2 win.

An early goal from Adam Marusic looked to set them up for a straightforward victory.

Inzaghi’s men had to be patient and wait until the 51st minute to get their second but it was a special moment for Italy forward Ciro Immobile.

His goal means he has become the first player in 61 years to score 27 goals after 25 matches of a Serie A season.

Francesco Cassatta pulled one back for the relegation-threatened hosts before Danilo Cataldi scored what proved to be the winner with 20 minutes remaining.

Domenico Criscito’s penalty in the 89th minute ensured a nervy ending but Lazio held on to seal the win and go just one point behind leaders Juventus.

Biancocelesti manager Inzaghi says he has an outstanding group of players and they enjoy each other’s company.

“Our sporting director Igli Tare helped us build a great squad, no one was expecting that we could perform so well, but I was confident about our room to improve,” Inzaghi said after the game.

“Our players are a group of friends who love each other and have fun training and playing together.”

Lazio are aiming to put an end to Juventus’ dominance of the Italian top flight and win their first Scudetto since 2000.

As for Immobile, he is now nine goals short of the overall Serie A goalscoring record in a single season, set by Gonzalo Higuain in the 2015-16 campaign when he scored 36 goals for Napoli.