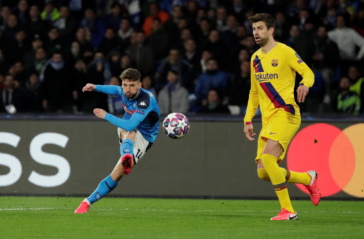 According to reports in Italy, Napoli have made progress as they try to tie down winger Dries Mertens to a new contract.

The 32-year-old was linked with Chelsea in the recent January transfer window, while Manchester United and Arsenal are also believed to be considering a summer move.

Mertens was close to joining the Blues on deadline day, only for the switch to collapse. All three British clubs are willing to return with offers for him this summer, with Mertens out of contract at the end of the current campaign.

The majority of Napoli fans are expecting him to move on, but CalcioMercato report that he may still stay put in Naples.

They suggest Mertens would be willing to sit down and talk with president Aurelio de Laurentiis, but he wants certain clauses in his deal, while the report claims the Belgium international is hoping to receive a three-year deal and he wants a higher fixed salary.

Mertens will fancy his chances of winning the argument after he became Napoli’s joint all-time top goalscorer when he scored against Barcelona in the Champions League on Tuesday.

Barcelona left Italy with a 1-1 draw ahead of the second leg, but Mertens was still able to score his 121st goal for the club, and he is now level with Marek Hamsik.

Inter Milan and Monaco have also expressed an interest in signing him but, for now, he appears ready to sit down and talk with Napoli chiefs.

Napoli currently sit sixth in Serie A and they return to league action against Torino on Saturday night. Mertens will not be available though after he suffered an ankle injury in midweek.

The former PSV Eindhoven ace will need at least 10 days to recover from the injury and he may also miss the Coppa Italia semi-final with Inter Milan on March 5.