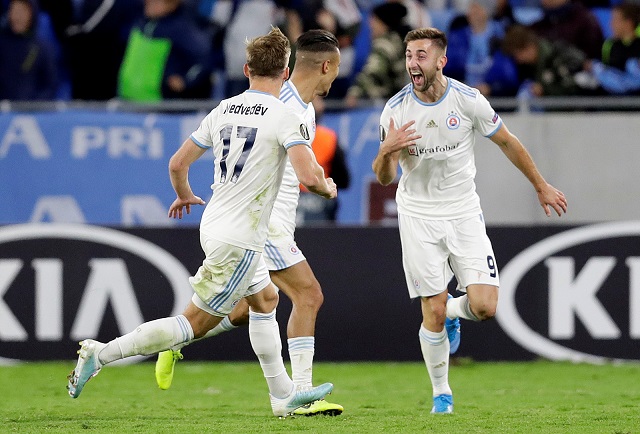 Lubo Moravcik is adamant Slovan Bratislava forward Andraz Sporar would become a big hit for Celtic if he makes the switch to Scotland this month.

Slovenia international Sporar enjoyed a sensational season with Bratislava last term, scoring 29 goals from 30 league appearances, and he has managed to keep that momentum going in the current campaign.

The 25-year-old, who started his senior career at Interblock in 2011, has netted 12 times from 11 league matches while he has also found the back of the net six times from 12 Europa League outings.

Scottish champions Celtic, who are going for an unprecedented ‘quadruple-treble’ this season, are said to be showing a keen interest in the forward as Neil Lennon targets attacking reinforcements.

Reports have linked Odsonne Edouard with an exit from Parkhead this month amid interest from several Premier League teams and the Bhoys see Sporar as a like-for-like replacement.

Moravcik, who played for the Hoops from 1998-2002, has backed the Slovenian to make the switch to Scotland and become a fans’ favourite.

“Sporar is the top player here in Slovakia,” he was quoted as saying by the Daily Record. “He was excellent in the Europa League this season with Slovan Bratislava and scored six goals in the competition and is in very good form.

“He is very strong physically, quick and he is good in front of goal, he makes good decisions in that area. He has got the potential to score a lot of goals for Celtic.”

It is thought Celtic, who are two points clear in the Scottish Premiership, will have to spend around £4million to land Sporar’s signature this month.