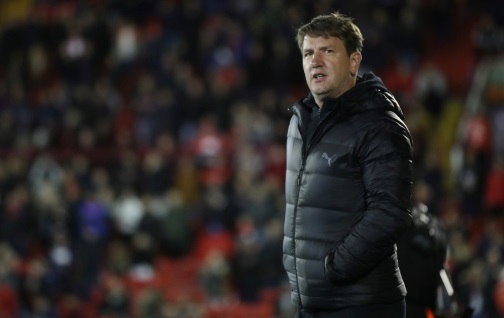 Hearts boss Daniel Stendel deserves huge credit for waiving his wages during the coronavirus shutdown so other members of staff can be paid.

The Scottish FA confirmed on Thursday that football in the country “remains suspended indefinitely” and will not resume until the end of April at the earliest due to the ongoing efforts to contain the outbreak of the coronavirus.

This will consequently have a huge impact on the finances of a number of clubs, including the Scottish Premiership’s bottom team Hearts, who have been vocal in their concerns, with owner Ann Budge asking all members of staff, both playing and non-playing, to take a 50 per cent wage cut.

Budge revealed earlier this week that the suspension of the game means Hearts will miss out on £1million worth of income next month alone.

Taking a 50 per cent cut will have huge repercussions for many individuals employed by the club, but manager Stendel, who only took over the reins at Tynecastle last December, has now confirmed he will forgo his wages during the shutdown so that more needy members of staff can be paid.

This is a fantastic gesture from Stendel, who himself will be feeling the pinch following a playing career that was spent mainly in the German lower leagues, while his time as a manager has taken him to Hannover and Barnsley before he arrived in Edinburgh.

Stendel is, of course, not the only individual to perform such a gesture, with defender Clevid Dikamona offering to terminate his contract to free up wages.

The Congo international wants to return home with his family to France during the crisis, but he hopes to re-sign with the club once the football season is back up and running.

Away from Hearts and Bundesliga giants Borussia Monchengladbach have been leading by example as their first-team squad have decided to forgo their wages to help out more needy members of staff, with the club’s coaches, directors and CEOs now following suit.

It would be great to see more high-profile people in the game perform similar gestures where possible, not only to protect people working at their own clubs, but also support teams lower down the football pyramid.

Hearts are not expected to be the only club in Scotland to ask members of staff to take wage cuts or even terminate their contracts, with teams in England also feeling the pinch – National League Barnet put all non-playing staff on notice of redundancy earlier this week.

This is certainly the time when the football community needs to be pulling together, otherwise more clubs and individuals are going to suffer.