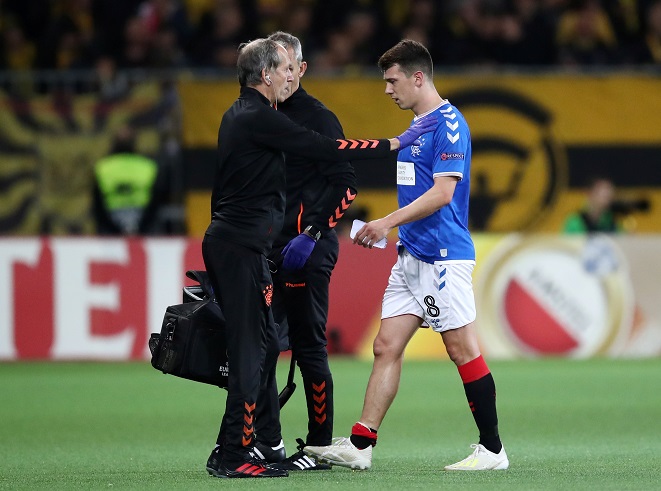 Rangers assistant boss Gary McAllister has downplayed the seriousness of the calf injury sustained by Ryan Jack in the 2-1 defeat to Hearts.

The Light Blues suffered a shock loss to the Scottish Premiership’s basement dwellers at Tynecastle, with the result made even worse by an injury to Scotland midfielder Jack.

However, McAllister issued positive news in his press conference in the place of manager Steven Gerrard on Tuesday, with Jack set to be back sooner than originally expected.

He told reporters: “Ryan (Jack) has had a little reoccurrence of an injury in his calf, we are talking 10 days, two weeks.”

Meanwhile, McAllister also opened up on the fact he feels Gers have not been playing up to their potential since the winter break.

Rangers produced a fine display to win at Celtic Park at the end of December but have since stuttered to wins over Stranraer and St Mirren before losing 2-1 to Hearts last time out in the Premiership.

McAllister feels the Light Blues have been underperforming and it’s something they will have to remedy.

He added: “Stranraer and St Mirren we got the results without playing great and we knew we had to turn up and be brave at Hearts. Some days you can’t win every match but as we said in the changing room you can’t lose the physical battle and we have to win every ball.”

Gers have a chance to get back to winning ways on Wednesday when they host Ross County at Ibrox in the Premiership.