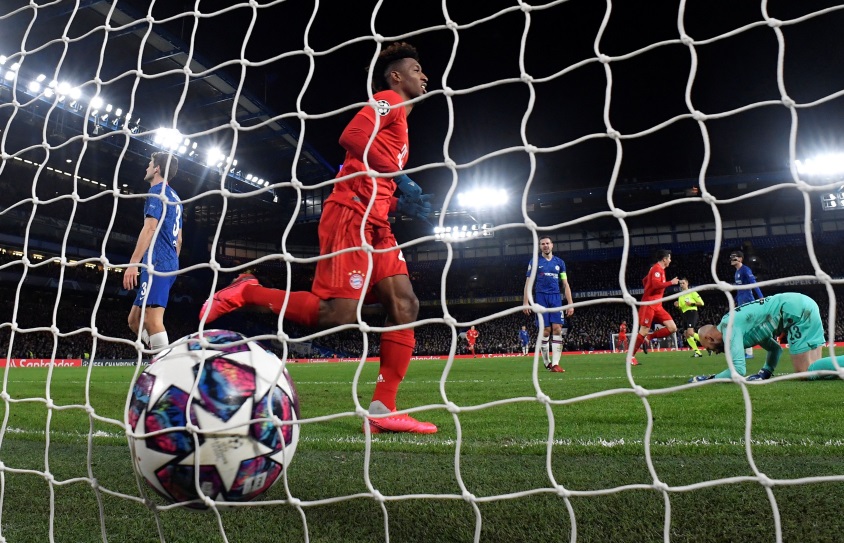 Chelsea's European journey appears to be at an end after a comprehensive 3-0 home defeat in the last 16 against Bayern Munich.

Bayern Munich were a study in poise and composure at Stamford Bridge, the Bundesliga side scoring three times in the second half in this repeat of the 2012 Champions League final.

Chelsea won that clash on penalties in Bayern’s Allianz Arena, current Blues boss Frank Lampard amongst the scorers, but they’ll require a footballing miracle in the second leg to trump the German champions.

Bayern controlled the first half but couldn’t force a breakthrough, while Chelsea looked dangerous on the break.

Former Arsenal winger Serge Gnabry then fired two goals in three minutes in the second half to leave Chelsea in a deep hole, before red-hot forward Robert Lewandowski added the icing on the cake.

Mason Mount fired over with Chelsea’s first effort from 20 yards on nine minutes, while at the end Thomas Muller and Kingsley Coman almost created a breakthrough three minutes later.

On the quarter hour, Lewandowski was foiled at point-blank range by Willy Caballero as Bayern began to dominate.

Caballero again halted Lewandowski before the half-hour while his opposite number Manuel Neuer almost gifted the hosts a breakthrough when his poor clearance was seized on by Barkley but Mount wasn’t able to reach his cross.

Muller’s unorthodox header on 36 minutes had Caballero beaten all ends up but the ball cannoned back off the crossbar.

Then finally on 51 minutes Bayern had their goal. Gnabry seized on a slip-up from Cesar Azpilicueta to drive at the heart of Chelsea’s defence. He fed Lewandowski and while the Pole could have been forgiven for going it alone, he unselfishly reversed a pass back to Gnabry to apply the finish.

It got worse just moments later, Gnabry inflicting more pain on a London club after his demolition against Tottenham in the group phase.

Again he worked in tandem with Lewandowski down the left channel and remained composed to slot low into the corner when the chance opened up.

Chelsea were firmly on the back foot, Tammy Abraham and Willian sent on as Lampard desperately tried to get a way back into the contest.

The power and pace of Alphonso Davies on 76 minutes saw him hurtling through the Chelsea cover and sliding a pass across the six-yard box to give Lewandowski a tap-in finish.

Chelsea’s task became impossible when Marcos Alonso was red-carded with seven minutes remaining for flinging an arm into the face of Lewandowski; the referee initially booked the Blues defender but VAR upgraded it to red on review.