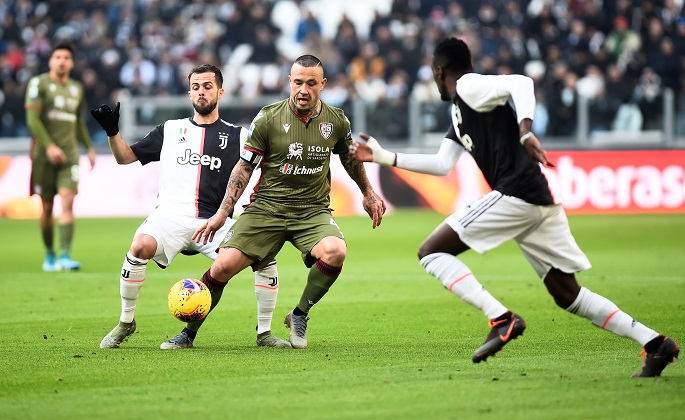 Radja Nainggolan reportedly must face a wage decrease if he is to join Cagliari on a permanent basis from Inter Milan.

The Belgian international joined the Rossoblu from Inter in the summer as Antonio Conte sought to rebuild his squad after taking over from Luciano Spalletti.

Nainggolan found himself out of Conte’s plans and secured a season-long loan deal to Cagliari in August, going back to the club with whom he enjoyed a very successful five-year spell with between 2009 and 2014.

Despite only being at the club on a temporary basis this season, the 31-year-old has captained the side, scoring five goals in 24 appearances.

Now, Cagliari are thought to be very interested in signing the midfielder on a permanent basis.

Nainggolan has two years remaining on his contract at the San Siro, though Inter would be prepared to allow him to leave for a fee of around 20million euros.

However, his annual salary worth a reported 4million euros could prove to be a stumbling block if he is to move to the Sardegna Arena.

The report does not state whether Nainggolan would be happy to take a cut to his wages but he appears to have little prospect of a future at the San Siro.

Cagliari enjoyed a good start to the season with the Belgian in the line up and they were as high as fourth in early December after embarking on a 13-match unbeaten run.

However, a run of ten matches without a win has seen them plummet to 12th in the table which led to the sacking of Rolando Maran as manager.

Former Wolves boss Walter Zenga was announced as his replacement but hasn’t taken charge of a game yet due to the coronavirus pandemic sweeping through Italy, leading to the postponement of all football.