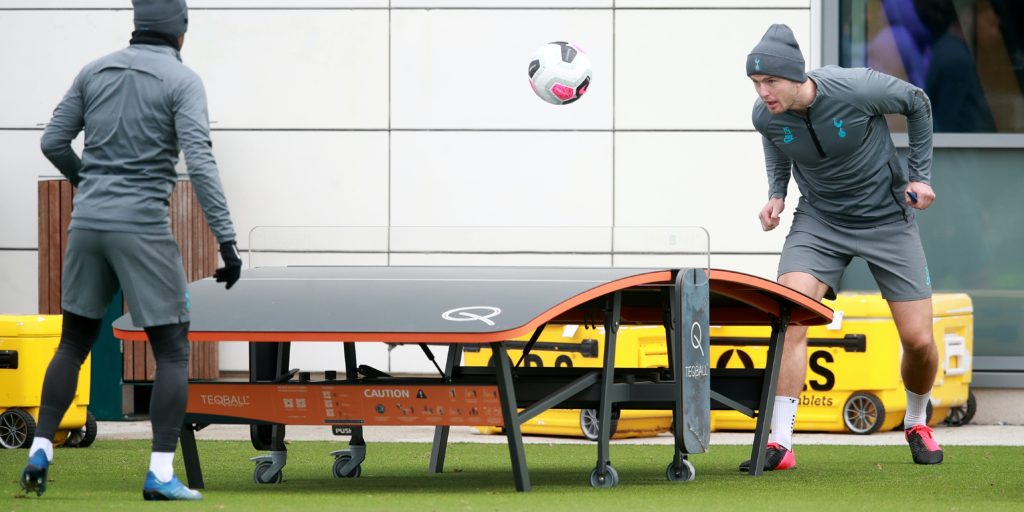 The game was created in Hungary among friends.

Harry Maguire, Sadio Mane and Wayne Rooney are among the stars to have embraced teqball during the coronavirus lockdown – a mixture of football and table tennis that has quickly grown from a Hungarian garage to a burgeoning international sport.

What has long been a common sight at training grounds is increasingly becoming more frequent in players’ gardens as they look for a fun and challenging way of filling the void left by the Covid-19 lockdown.

From Neymar to England internationals such as Trent Alexander-Arnold, Callum Hudson-Odoi and Tammy Abraham, numerous players past and present are embracing teqball at a time when the footballing landscape has been decimated.

“We miss football and all the players miss football – everyone misses football,” Viktor Huszar, one of three co-founders and inventors of teqball, told the PA news agency.

“This is just bringing back a piece, a little piece of football with teqball, joyful things.

“We see now, if you check Sadio Mane’s last picture, you see the football goals, all the different exercises… and the teqball table there.

“The same happens with many of the players that you see as part of their everyday training routine. This is how they keep up.”

The sport is the brainchild of former semi-professional player Gabor Borsanyi and Huszar, who took their love for football and adapted it to their limitations in terms of time, numbers and space by using a curved table tennis-style table to face one another.

Initially played between friends in a small garage in Hungary, continual positive feedback led the first prototype tables to be developed in 2014 and within three years the Federation Internationale de Teqball (FITEQ) was established.

The big moment came in 2015 when Barcelona great and current Holland manager Ronald Koeman gave the sport the thumbs up.

“Southampton, that’s the first table we have in the Premier League,” the FITEQ chairman said, having visited the then Saints boss and assistant Erwin Koeman, the ex-Hungary manager.

“We never really pushed teqball, we just had some people and we asked what Ronald Koeman says because he is an experienced coach.

“When they said (they liked it), like Henk Ten Cate from Barcelona, Chelsea and Ajax, and Koeman, then we said ‘OK, if they say this is good and they worked with Messi and all these guys, then this actually really works’.

“That’s when we started to push it more as a structured organisation and then it went from one Premier League club to the other, one player to the other.

Increasing numbers of players are embracing teqball and the third annual teqball world championships was held in December, just months before coronavirus changed the sporting world.

“We see that teqball is really a sports equipment that has the social distance type of sport,” Huszar said.

“Actually, the table is designed with three metres length, so you’re always minimum, three, three-and-a-half metres from each other.

“Teqball is about developing your touch and your cognitive skills because you have to make such quick decisions that you’re under pressure all the time.

“But even Premier League players, they need that perfect touch and in teqball you get used to that – you literally get it every second and you just have to make sure that you have a quick reaction before you touch the ball.

“So, and I play teqball actively, like every day, for me this is a 50 per cent mental cognitive improvement and also basically just perfecting your skill and touch and coordination, balance on a very short platform.”

Players have been training by folding the teqball table and playing off half of it, with the federation offering half-priced tables to Professional Footballers’ Association members during the lockdown.

Teqball is growing as a sport as much as a recreational activity, with more than 50 national federations formed and 160 athletes from 57 countries at the most recent world championships.

“Now I see the pictures and the videos, and it is surreal,” Huszar added. “But certainly the early moments were the incredible ones

“I’m quite sure that teqball is still a very early stage sport because I also look at it as a sport.

“In terms of the development, it’s hard to keep up with that.

“I think that it’s unstoppable, so sometimes I even made jokes with the other two co-founders that, look, whatever we do, we don’t really have the chance to stop it.”