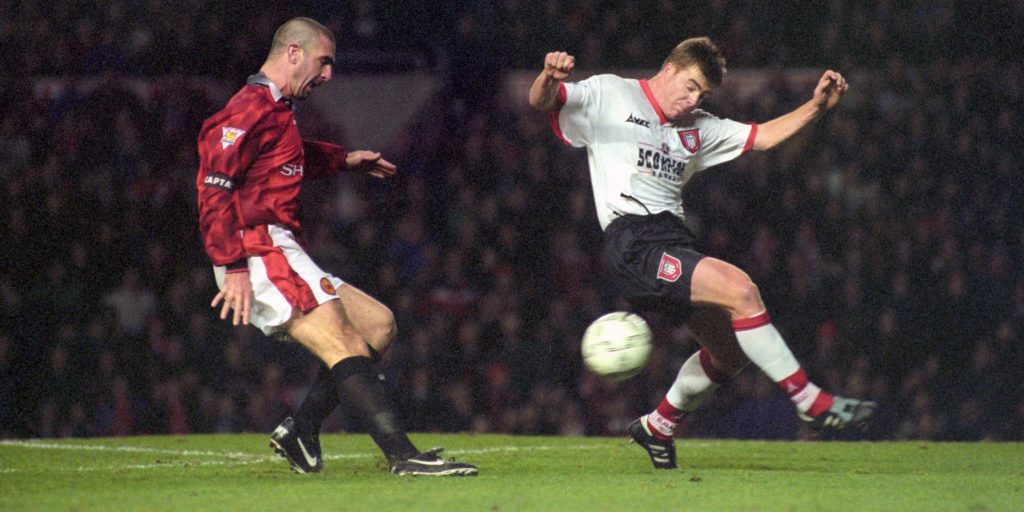 Cantona was appointed captain in what would prove to be his final season, announcing his retirement from football aged just 30 in 1997.

Perhaps not the most obvious choice as captain, the mercurial ‘King Eric’ is nevertheless revered as an Old Trafford great and one of the best players to grace the Premier League.

His decision to move across the Pennines from Leeds in a GBP 1.2million transfer in November 1992 caused a stir back in West Yorkshire but, unbeknown to many, Sir Alex Ferguson had discovered the missing piece in his jigsaw.

With Cantona, upturned collar and all, pulling the strings up front alongside Mark Hughes, United won their first top-flight title in 26 years while he finished with 26 goals the following season to help his side to a Premier League and FA Cup double.

Controversy was never far away as he marked his Elland Road return by spitting at a supporter but even that paled into comparison with his ‘Kung fu’ kick on a Crystal Palace fan, an incident that stunned the football world.

Front and back page headlines followed, Cantona admitted a criminal charge of assault but had a prison sentence reduced to community service, while he was banned by United for the rest of the season, which the Football Association extended to eight months.

In his absence, Blackburn denied United a third consecutive title in 1994-95 and the Frenchman’s importance to the Red Devils was underlined the following season as he top-scored with 19 goals as they once again secured the double.

Steve Bruce’s departure led to him being appointed skipper in what would prove to be his final season, announcing his retirement from football aged just 30, leaving United after helping them to a fourth title in five seasons.

His famous chip against Sunderland followed by his scan of the crowd celebration lives long in the memory more than 20 years on, as do the chants of ‘Ooh, ahh Cantona’ that filled Old Trafford, as he went down as one of the finest players to wear United’s revered number seven shirt.