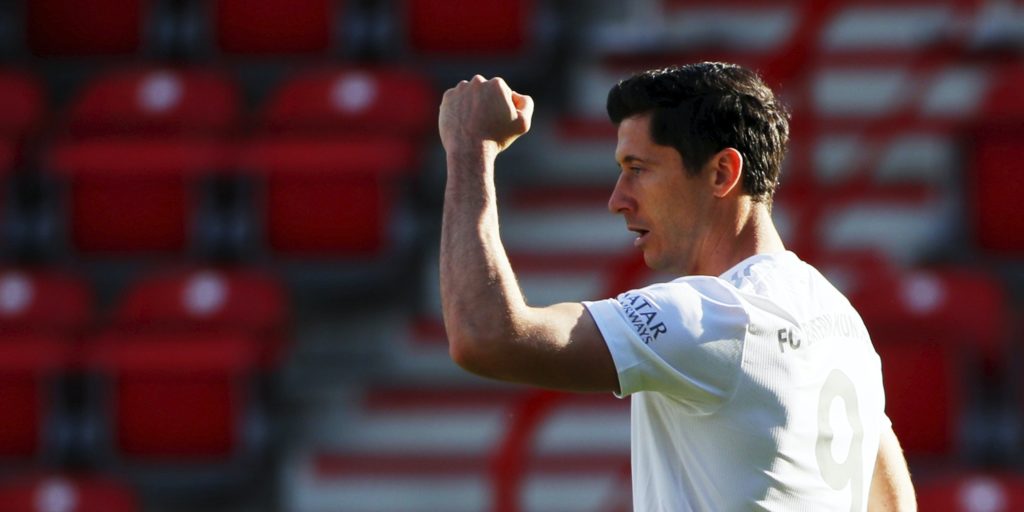 Lewandowski’s 40th goal of the campaign moved Bayern four points clear at the top of the Bundesliga table.

Bayern Munich sharpshooter Robert Lewandowski’s 40th goal of the season helped see off Union Berlin as the Bundesliga leaders returned from the coronavirus suspension with a comfortable 2-0 victory.

Borussia Dortmund moved within a point of the perennial champions thanks to their thumping 4-0 win against rivals Schalke on Saturday, but Hansi Flick’s men managed to restore their cushion in the capital.

Union were organised but lacked attacking spark in Sunday’s clash, with Lewandowski’s spot-kick and a Benjamin Pavard header enough to see Bayern triumph at the empty Stadion An der Alten Forsterei.

Flick’s men were far from their best on their return from the coronavirus suspension, but they did their job diligently against well-drilled Union as they restored their four-point lead at the top.

Thomas Muller saw a first-half opener ruled out for offside, but the visitors would go into the break ahead after former Dortmund defender Neven Subotic caught Leon Goretzka in the box.

Lewandowski, who was able to recover from a knee issue during the league’s suspension, coolly slotted home the resulting penalty five minutes before the interval to make it 40 goals in all competitions – the fifth straight season he has managed to reach that figure.

Union remained under the cosh for the remainder of the match but it took until the 80th minute for Bayern to notch a second, with Pavard rising to meet a Joshua Kimmich corner with a thumping header.

Again, this was a strange occasion given the hygiene regulations and lack of fans at a match that could have been tighter had the raucous home fans been in attendance.

Union, whose coach Urs Fischer was not in the dugout following the death of his father-in-law, have been among the surprise packages this season and started on the front foot, with Marius Bulter and Anthony Ujah having early efforts.

But Bayern soon settled and took control of proceedings, rippling the back of the net in the 17th minute.

Goretzka rose highest from a corner and headed to the far post, where Serge Gnabry’s glancing header was turned home by Muller.

Gnabry’s effort was already bound for the bottom corner and Muller’s instincts cost his side, with the video assistant referee confirming the Bayern forward had just strayed offside.

Alphonso Davies was proving a handful down the left and Union goalkeeper Rafal Gikiewicz just prevented his cross reaching the lurking Lewandowski – but the Bayern star would not have to wait long to beat his Polish compatriot.

As half-time approached, Subotic caught Goretzka in the box as he attempted to clear and Lewandowski stepped up to coolly strike past the wrong-footed Gikiewicz.

Pavard sent a thumping strike into the sidenetting as Union stumbled into the half-time break, with the World Cup winner and Goretzka having chances shortly after the restart as Bayern looked to extend their advantage.

Grischa Promel snapped an effort wide on a rare voyage forwards by Union, who were penned back and having to dig deep to keep the visitors at bay.

Substitute Kingsley Coman’s cross just failed to find a team-mate and Gnabry was denied as the clock wound down, with Pavard ending any doubts in the 80th minute when powering home Kimmich’s corner.