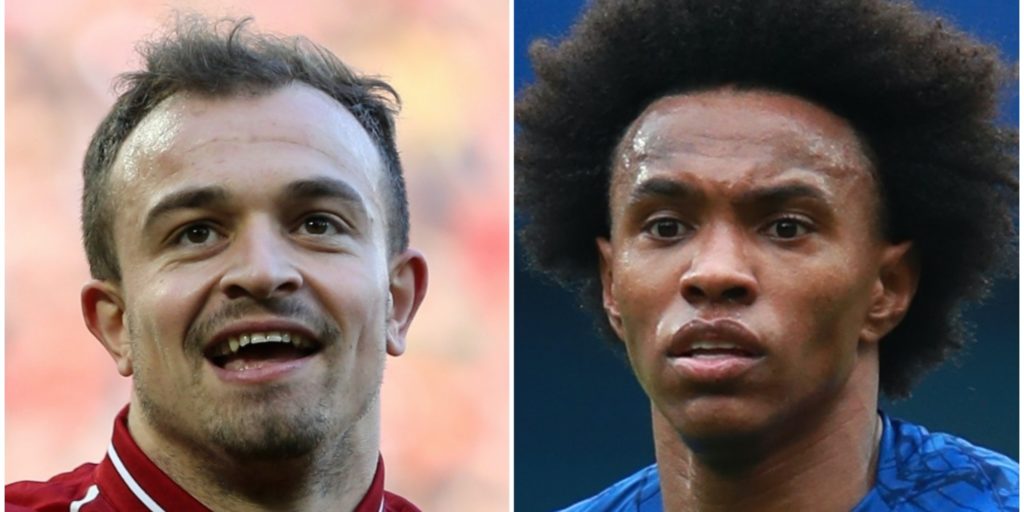 Xherdan Shaqiri and Willian could be on the move.

Newcastle fancy their chances of signing Xherdan Shaqiri, according to the Daily Mail. The Switzerland winger has played just 10 times for Liverpool this season, and is reportedly being eyed by Roma and Sevilla. He has three years left on his Anfield contract but could be ready to move one and Newcastle, who face a potential takeover by a Saudi-backed consortium, are claimed to have contacted his representatives.

Chelsea winger Willian is wanted on a free transfer by north London rivals Arsenal and Tottenham, reports the Daily Telegraph. The Brazil midfielder has 59 goals in more than 300 games since joining Chelsea in 2013, but his contract ends this summer. The Gunners and Spurs are prioritising swap and part-exchange deals due to financial difficulties from the ongoing pandemic, with both hoping to snap up the soon-to-be free agent.

The Daily Mirror reports Wolves hope to sign Sporting Lisbon midfielder Joao Palhinha. The 24-year-old has an GBP 18million buy-out clause in his contract with the Portuguese team, but they are willing to negotiate a lesser deal amid the coronavirus pandemic. The defensive midfielder has impressed since being loaned to Braga, where he been for the last two years following loan spells with Moreirense and Belenenses.

Philippe Coutinho: Spain’s Mundo Deportivo reports Bayern Munich have opted against taking up their option to sign the Brazil midfielder from Barcelona permanently, prompting Newcastle to begin talks with the 27-year-old.

Rajiv Van La Parra: Norwich and Swansea are keen to sign the 28-year-old free agent forward after he left Serbian champions Red Star Belgrade, according to the Daily Mail.