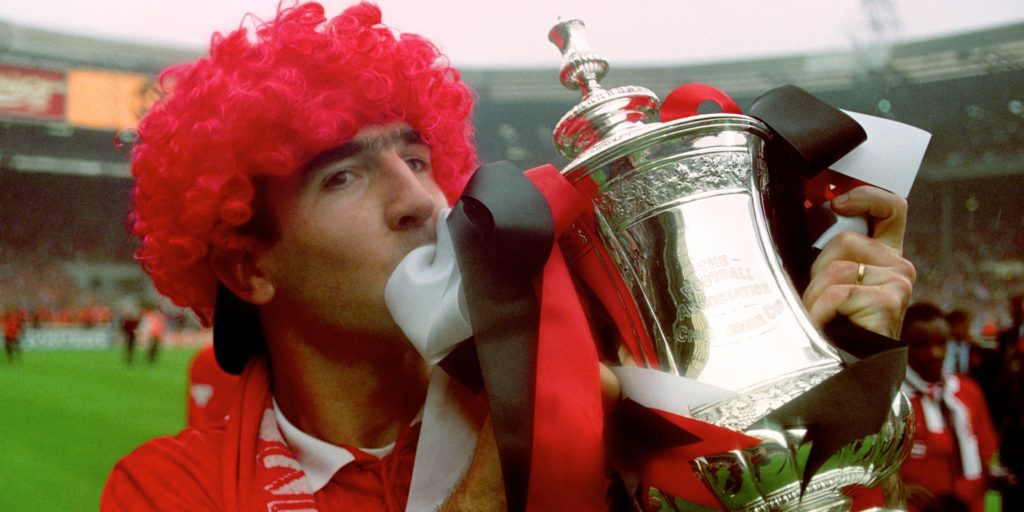 Cantona took centre stage in the 1993-94 season with 25 goals in 48 appearances in all competitions.

Having helped Manchester United end a 26-year wait for a top-flight title, Eric Cantona had firmly ingratiated himself with the club’s fans following a fractious move from Leeds.

United lost only twice following the Frenchman’s move across the Pennines as they won the inaugural edition of the Premier League. Cantona, though, was only just getting started at Old Trafford.

By this stage, ‘King Eric’ had formed a fruitful partnership up front with Mark Hughes and it was Cantona who took centre stage in the 1993-94 season with 25 goals in 48 appearances in all competitions.

Eighteen of those strikes came as United retained the Premier League title with a degree of comfort while Cantona, with his collar up turned and a flair few others can boast, struck twice in the FA Cup final win over Chelsea.

It was the first of two doubles United achieved with Cantona leading the line.

While Cantona would earn the acclaim of his peers after being handed the PFA Players’ Player of the Year award for that season, controversy was never far away from the mercurial number seven.

He stunned the footballing world with his ‘Kung fu’ kick on a Crystal Palace fan the following season, an incident that led to Cantona being banned for eight months by an irate Football Association.

In his absence, Blackburn denied United a third consecutive title in 1994-95 and the Frenchman’s importance to the Red Devils was underlined the following season as he top-scored with 19 goals as they once again secured the double.

Steve Bruce’s departure led to him being appointed skipper in what would prove to be his final season, announcing his retirement from football aged just 30, leaving United after helping them to a fourth title in five seasons.