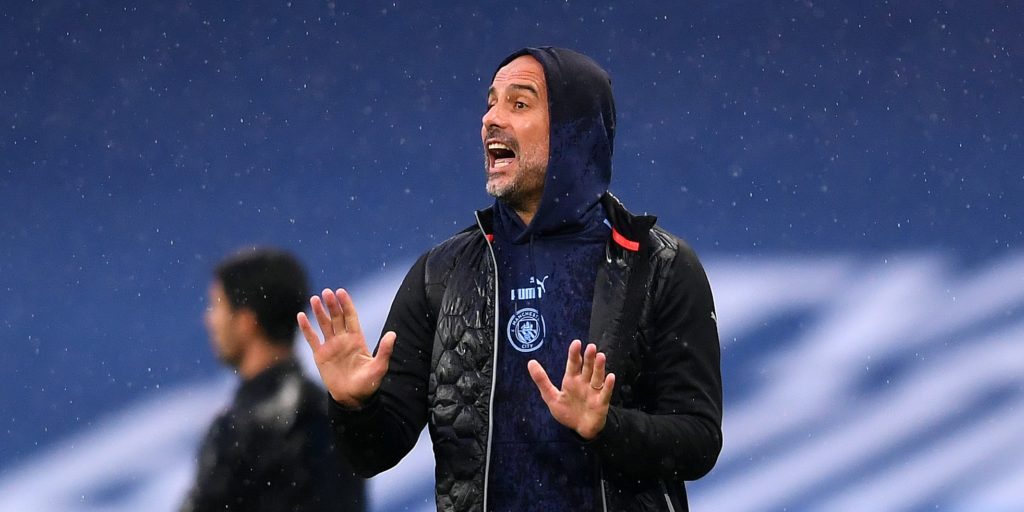 City picked up all three points in their first game for more than three months.

Pep Guardiola was pleased by Manchester City’s roaring return to action against Arsenal after the lengthy coronavirus suspension.

It had been 101 days since the Manchester derby defeat at Old Trafford and there were plenty of unknowns heading into Wednesday’s encounter given the extended break and unusual surroundings.

But City coped better with the situation than Arsenal, who were hampered by David Luiz’s calamitous appearance off the bench at an empty Etihad Stadium.

The substitute’s error allowed Raheem Sterling to score and the Brazilian was sent off after bringing down Riyad Mahrez in the box, leading Kevin De Bruyne to score a spot-kick that was added to late on by Phil Foden to complete a 3-0 win.

“The game, 11 against 11, the first minutes was typical after two months off without a lot of energy for both teams,” Guardiola said.

“We were lucky to score the first goal at the end of the first half and after with the second one, the penalty and sending off, it was much easier.

“But in general after two months, we didn’t know exactly how the team, how it’s going to feel, we make a good performance against a good team.

“Absolutely we can get better. We have respect for Arsenal because we know exactly what they want to do but it was little bit of a mystery to know how the team would be after more than two months out.

“But we have dynamic players, they need not much training sometimes to get the condition.

“The problem is not now, to play this game at this level.

“The problem is the amount of energy you expend without having the good physical conditions for the next games.”

But the match was not without problems for City.

Eric Garcia, a surprise starter, left the field on a stretcher late on, having had lengthy treatment following a thumping collision with team-mate Ederson.

“We are concerned about Eric of course,” Guardiola said. “He is conscious, but I think he is going to be tested tonight because a kick in the head is always so dangerous.

“The doctor told me he was conscious and then they asked me to be with you. I’m pretty sure we’re going to do absolutely everything to be sure that everything is fine and well.”

Arsenal midfielder Granit Xhaka also left on a stretcher after an early injury, while Pablo Mari pulled up midway through the first half as he also saw his return to action halted.

“They are getting assessed at the moment and we will know something more probably tomorrow morning,” Arsenal boss Mikel Arteta said.

“Pablo’s one did not look really good, to be fair.”

It was a disastrous first return to the Etihad Stadium for Arteta, who left his role as Guardiola’s assistant in December to take the Arsenal hotseat.

Luiz’s rustiness was key to the loss and the defender is out of contract at the end of June.

“I don’t know what will happen with his contract,” Arteta said.

“I know what happened today. I know the way David reacted because I know him well, not only as a player but a person as well.

“There was a reason why I didn’t select him from the start and he had to play because Pablo got injured.

“He’s always going to try and give you his best.”

Arteta kept things short in his virtual post-match press conference and gave little away when asked about the absence of Mesut Ozil from the squad.

“It was a tactical reason,” he said, before adding upon being pushed: “Because I need players in other positions as well, so that’s why I decided to leave him out.