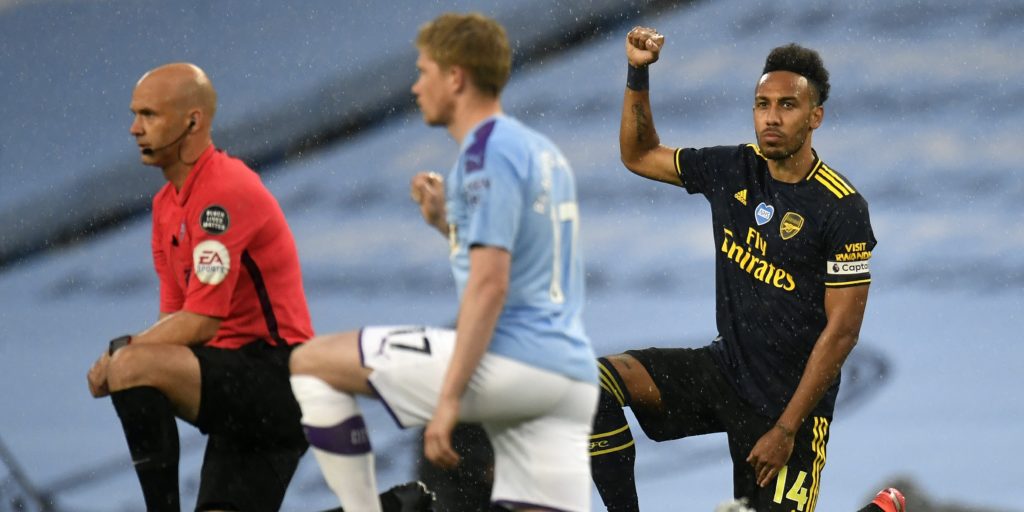 The Premier League restarted on Wednesday night after a 100-day absence.

Premier League players took a knee before kick-off at Aston Villa versus Sheffield United and Manchester City against Arsenal in support of the Black Lives Matter movement.

The top-flight restarted on Wednesday 100 days after it was halted because of the coronavirus pandemic and those on the pitch, including the match officials, at Villa Park and the Etihad Stadium knelt down at the start of the game.

Instead of the names on the back of their shirts, players are wearing the words Black Lives Matter for the first 12 fixtures of the season.

A Black Lives Matter logo will also feature on jerseys for the remainder of the campaign.

The statement added: “In the first Premier League fixture of Project Restart both clubs hope that the act of ‘taking a knee’ will send a strong message of unity and amplify the many messages of support from Premier League players and the wider football family.”

It was confirmed last week any player who wishes to take a knee before or during matches – which has come to be recognised as a symbolic act in opposing racism in the last couple of years – would be supported by the league.

Several clubs and players in the Bundesliga, the first major European league to resume amid the health crisis, have shown their support for the Black Lives Matter movement, which has gained traction after the death of George Floyd.

Floyd, an unarmed black man, was killed in Minneapolis last month after a white police officer pressed his knee into his neck while in custody, sparking demonstrations across the United States and the rest of the world.