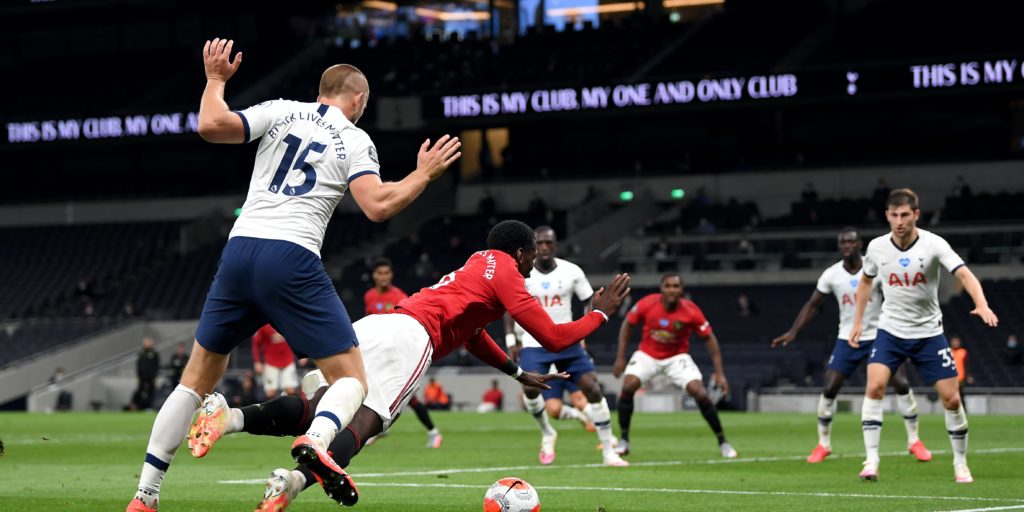 A moment of magic from Paul Pogba helped Manchester United earn a deserved point in a 1-1 draw at Tottenham, where there was some late VAR drama.

The Frenchman, coming up against his former adversary Jose Mourinho, produced a fine piece of skill to win an 81st-minute penalty, which Bruno Fernandes coolly converted to cancel out Steven Bergwijn’s first-half opener for Spurs.

It looked like Fernandes would have a second opportunity from the spot 10 minutes later when referee Jonathan Moss saw another foul by Eric Dier, but the video referee rightly overturned the decision.

United were full value for their point and had a host of chances to win the game in the second half as Spurs failed to see it out, despite their pragmatic approach.

The hosts led after Bergwijn’s 27th-minute strike, which earned United goalkeeper David De Gea strong criticism – notably from former captain Roy Keane – for not stopping a shot which was straight at him.

A win for Mourinho against his former club would have put them firmly back in the race for the Champions League but they remain outsiders, still four points behind Ole Gunnar Solskjaer’s men, who extended their unbeaten run to 12 games in all competitions.

The first 20 minutes at Tottenham’s stadium, with specifically designed acoustics to help keep the noise of 62,000 fans in despite the new normal of empty seats, were uninspiring

United were slightly the better side and should have gone ahead moments before the first drinks break, but Marcus Rashford, who had a monumental week off the pitch, could not convert a golden chance.

Davinson Sanchez’s miscued header went straight to the England international at the far post but his first-time shot was straight at Hugo Lloris, who did well to keep the ball out with his feet.

It looked as if United were going to grasp the game by the scruff of the neck as Lloris was forced into two more routine saves from Fred and then Fernandes.

But it was Spurs who went ahead with their first real attack of the game as Bergiwjn produced a moment of individual skill and power.

Serge Aurier’s interception fell to Bergwijn who burst through the United defence as if they were not there and fired a powerful effort through the hands of De Gea.

It was great play by the Dutchman but questions will be asked of the way Harry Maguire and Fred were beaten so easily and also over De Gea’s inability to keep the ball out, with Sky Sports pundit Keane saying he should not be allowed back on the bus after the game.

If De Gea was at fault then he made some atonement five minutes later with a superb save.

Spurs had joy down the right and Bergwijn sent in an inviting cross for Son Heung-min, but the Spaniard acrobatically tipped over the crossbar.

United came out meaning business after the break and they controlled the game, setting up camp in Tottenham’s half.

Mourinho’s men were resolute, though, and restricted the chances United had, with Fernandes’ drilled effort their best effort.

Pogba, who played under Mourinho at Old Trafford, was brought on and he immediately helped up the ante even further.

But Spurs were repellent and a brilliant tackle from Dier denied Anthony Martial, who then brought a brilliant save out of Lloris – the Frenchman denying his compatriot with an acrobatic tip over the bar.

They could not hold out, though, as a bit of Pogba magic helped United draw level in the 80th minute.

The Frenchman made a fool of Dier by ghosting past him and then drew a foul out of him, with Fernandes confidently striking the penalty into the bottom corner.

On the stroke of 90 minutes United were awarded another penalty when Dier was adjudged to have tripped Fernandes, but VAR decided there was no foul and it ended 1-1.